I just looked at my cell phone and the temperature is 6 degrees. Of course, that doesn’t include the wind chill. If you’re like me and live in the northeastern United States, then you’re feeling the bitter cold. Coincidentally, I found this coin from a warmer climate than here.

Last night, I opened a roll of quarters as I needed to do some laundry. Towards the middle of the roll, I found one with an edge that was all grey. I thought it might had been a silver Washington Quarter

, but was surprised to see the face of Queen Elizabeth and the quarter coming from Bermuda. I just looked to see what the temperature was there, and it’s a balmy 59 degrees. I’m not sure when we’ll see that temperature again. Anyway, seeing that I found a Bermuda quarter, I’d find more information about it. 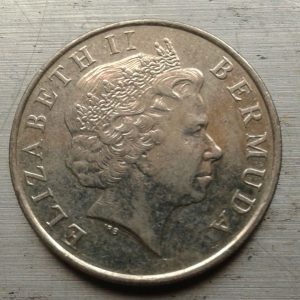 Bermuda is an island in the Atlantic Ocean, around 775 miles (1,248 km.) from New York City, 650 miles (1,040 km.) from Cape Hatteras, NC and 1,040 miles (1,670 km.) from Miami. Bermuda is a territory of the United Kingdom and has belonged to the British since 1609 when some of the people who had established the first British settlement in the United States, Jamestown in 1607, survived a hurricane and discovered the island. The first coins on the island came around 1615 and 1616 and would have the same denominations as the British: twopence (two pennies), threepence (three pennies or a quarter shilling),  sixpence (six pennies or half shilling) and twelvepence (one shilling). Supposedly, some of the coins were struck in England and some on the island. They would be the first English coins in North America, but were probably not used in Europe or America as the silver content was little or none. 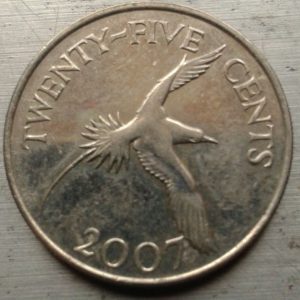 For a long time, Bermuda would not mint its own coins. With Spanish and British occupying many of the Caribbean Islands and Latin America, Bermuda would see a lot of coins from Spain and England. The Pound Sterling would be the official coins of Bermuda until 1970, when they would start producing a decimal system similar to the United States and Canada. Similar to Canada, Bermuda would have the portrait of Queen Elizabeth II on every denomination. Bermuda has had different portraits of the Queen since 1970. The one on the quarter that I found was the queen’s fourth portrait. Although this coin had a grey colored edge, it is not composed of silver, but copper and nickel similar to the modern Washington Quarter

Though I’m not currently collecting foreign coins, I’m still going to add it to my change box. Maybe someday, I’ll put together a foreign coin collection of what I have found over the years. Should be interesting. Are you or would you consider collecting coins someday? Let me know what you think about coins outside of the country you live.

4 thoughts on “Wish I Was in Bermuda Today”