You go through a roll of Washington Quarters

and you’ll see them in there, State Quarters

. Every year between 1999 and 2008, there would be five state designs released and billions of quarters minted. They would come out in order that they entered the union from Delaware(which entered in 1787) to Hawaii(which entered in 1959). So, there are 50 state quarters out there, and everyone has a favorite. 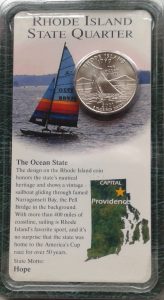 My favorite would have to be my home state, Rhode Island. Since I’m speaking about Rhode Island, I have to tell my RI story. Six months out of college (Rhode Island College by coincidence), I got my first big IT job and the headquarters was in Dallas, TX. They were in the process of building the new headquarters in Plano, about 20 miles north of Dallas. I had to fly to Dallas for job orientation. One of the nights I was there, a bunch of us went to an Italian Restaurant. While waiting for the meal, we went around the table talking about where we were from. It got to me and I hesitantly said “Rhode Island”. One guy replied “Isn’t that the island by New York City?”. I told him “You would be surprised how many people think that is Rhode Island. You’re close but that is actually Long Island which is part of the state of New York. Rhode Island is just north of Long Island and all of Rhode Island is only partially an island.” I think I blew his mind, as well as a few others on that table. I got to give them a brief history lesson of Rhode Island.

Rhode Island was the thirteenth and the last of original 13 colonies to join the union on May 29, 1790. The quarter would be released on May 21, 2001. One of Rhode Island’s nicknames, the Ocean State, appear on the quarter to represents the state’s 400 miles of coastline. Rhode Island is also known as “Little Rhody” because it is the smallest state in the union. The design on the coin shows a sailboat on Narragansett Bay with the Pell “Newport” Bridge in the background. Rhode Island has been known as the sailing capital because of all of the America’s Cup races that ran in Newport. The Pell Bridge connects the town of Jamestown to the city of Newport. It would take a second bridge between Jamestown and North Kingstown for people to be able to drive from Newport to mainland Rhode Island.

Rhode Island is a beautiful state, whether you’re at the coast, or in the Blackstone River Valley. Some of my out of state friends make fun of the size of the state, but that’s ok. It only takes me an hour to get from the bottom of the state to the top, but would take days to see everything Rhode Island has to offer.

So, what’s your favorite State Quarter

? Maybe it was the place you were born. Could be a state that you visited or went to school. Maybe it’s just the design on the quarter. In any case, I’m sure you have a favorite.