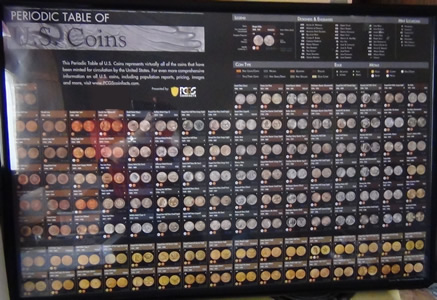 For my latest birthday, my best friend and coin collecting partner gave me this poster designed by PCGS. If you look at it, it does looks like a periodic chart. This chart shows the 121 circulating coins of the United States from when the US Mint first opened in 1793 in Philadelphia to, I think, 2015. As it is all the different circulating coins, it includes clad, silver, and gold coins. It looks like a Type Set collection, but I personally don’t think I would be able to get all 121 of these.

So What’s on This Table?

The first you will see is on the top right corner of the poster. This is the legend of the table that helps you get more information for each coin. First, there is a list of every designer or engraver of these coins. Then, there are the seven mint locations where US coins were minted. You’ll notice West Point is not included here as they have been used mainly for commemoratives, bullion and special coinage. Below that is a color code distinguishing each coin type or denomination. Next is the edge of the coin. The most common edges are the smooth plain like on nickels and dimes, and reeded like dimes and quarters. A few like the recent Presidential Dollars have lettering on their edges and the gold Indian Eagle which is decorated because it has 46 raised stars (before 1912) and 48 raised stars (1912 on) to represent each US state. Finally, there are a list on metals that compose the coin. They only display the five most common metals. Don’t expect to find other metals like manganese. 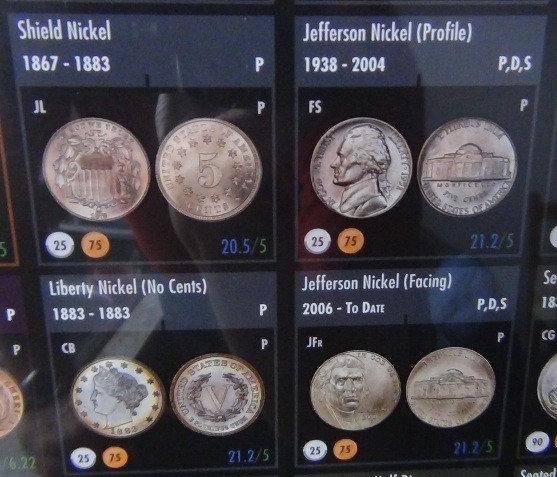 Now, let’s look at the individual coins. Here you see some US Nickels. The color on the top distinguishes the denomination, which are obviously nickels. Up top is the name of the particular coin, the first and last years that it was minted, and the mints where it was minted. Above the coin and on the left side are the designer(s) of the coin. If there was a different designer on the obverse than the reverse, then both initials will be displayed. For coins with different design like the Statehood Quarter, and asterisk ‘*’ will be displayed as well as the designer on the other side of the coin. Next is the obverse and reverse designs of the coin. Above the coins and on the right side is the edge of the coin. As these are all nickels, they all show a ‘P’ for a plain or smooth edge. On the bottom left is the composition of the coin. All of these nickels have a composition of 25% nickel and 75% copper. Finally, at the bottom right are two different numbers. The blue number is the diameter of the coin in millimeters and the number in green is the weight of the coin in grams. These are sometimes used in distinguishing between an authentic coin and a counterfeit one. A lot of basic information for each coin which would benefit new coin collectors as well as one’s like me that have been collecting for a number of years.

As well as the clad and silver coins that we know, there are every circulating gold coin up to 1933. This includes the $3 Indian Princess and surprisingly the $4 Stella. STELLA!!! I didn’t think the Stella coin was released in circulation, but I may be wrong. Anyway, you’ll see every dollar, quarter eagle ($2.50), half eagle ($5), eagle ($10) and double eagle ($20) including the popular St. Gaudens. 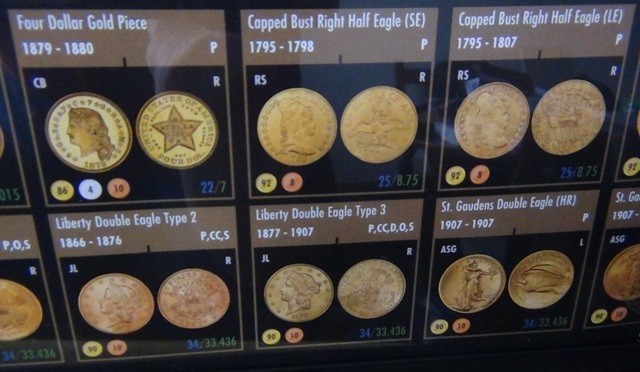 Included with this table are variations of certain US coins. They include:

There are also variations on Gold Coins.

What’s Missing in This Table?

Here are a few that I think are missing here, though you may think of others:

Maybe I’m thinking too much about this, but after all, they have four different Kennedy Half Dollars and the only difference on three of them is their composition.

A Nice Gift for Coin Collectors

Maybe a birthday or Christmas gift for your favorite collector or even yourself. This would be a perfect gift for someone who is working on a United States Type Set. I personally love mine. I’m planning on bringing it to the next Coin Club meeting to show others.

You can find this on the PCGS site, Amazon and EBay. If you do decide to buy one, don’t spend more than $20.00. That was the original price for this and that’s what my friend paid for it.

Build a US Type Set

2 thoughts on “The Periodic Table of US Coins”