Skip to content
Home » Investing » The Other “D” Mint

In 1906, Denver started minting coin with the mint mark “D”,  but there was another US mint with that mint mark before Denver. Dahlonega, GA would be the site of the United States first gold rush, 20 years before Sutter’s Mill in California. With the slogan “It’s Pure Gold”, Dahlonega has become a popular tourist attraction, just one hour north of Atlanta. 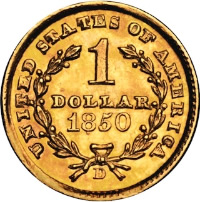 The area around Dahlonega was originally home to the Cherokee and Creek Indians. The Cherokee named it Talonega meaning yellow, though it was spelled Dalonige. In 1828, Benjamin Parks, who was hunting a couple of miles south of present day Dahlonega, tripped over a rock which would turn out to be gold. Within a year of this initial discovery, over 15,000 miners would clear out the gold. These miners were illegally mining the gold because the land belong to the Cherokee as described in the Treaty of Washington 1819. After hearing arguments from the miners, the US Government would move the Cherokee to modern Oklahoma. The State of Georgia founded Talonega in 1833, renaming it Dahlonega in 1837.

With gold being found in Georgia as well as North Carolina, it was decided to build new US Mint branches instead having people go to Philadelphia. In 1838, the Dahlonega mint opened to produce only Gold Coins

. To distinguish between which mint certain coins were being produced, a mint mark was added to Dahlonega coins. A “D” mint mark would be added to the coins, mostly on the reverse. The annual production of Gold Coins

minted there was significantly less than Philadelphia, making their coins more sought after. Dahlonega would mint coins until the beginning of the Civil War in 1861. After the Civil War, it was decided not to reopen the Charlotte or Dahlonega mints. By then, San Francisco was also minting gold coins as well as Philadelphia, and with the Intercontinental Railroad completed in 1869, there was no need to reopen them. The building would be bought by North Georgia College in 1873, but would burn down in 1878.

As of the 2010 Census, Dahlonega was a population of 5,242, but get a lot of tourists visiting the area. Besides being known for their gold, it is also known as the Heart of Georgia’s Wine Country. A number of vineyards and wineries have sprouted out in the area and many people go for their wine tastings.

At the Public Square is the Dahlonega Gold Museum. The building was the original country courthouse from 1836 to 1965. You can also visit some of the gold mines around the area. This is also “Gold Rush Days” festival which occurs in October.

In place of the original mint building is the Price Memorial Hall, which still belongs to North Georgia College. In memory of the mint is a gold steeple.

One of my goals is to visit every mint location in the Continental US. Granted, there is no more US mint building in Dahlonega, but still would like to see the gold exhibits and gold mines. Maybe even attend the “Gold Rush Days” festival. Would you consider visiting Dahlonega?