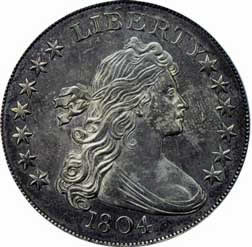 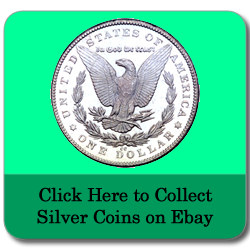 US Silver Dollars are popular among coin collectors and investors, and one of 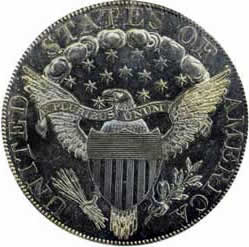 the rarest and most popular of them all is the 1804 Silver Draped Bust Dollar. Unless you go to the Smithsonian in Washington D.C. any time soon, don’t expect to see one as there were only 15 known to exist.

In 1795, the US began minting Draped Head Silver Dollars.The first few years saw a smaller eagle on the reverse, but in 1798, it was changed to a more heraldic eagle similar to the United States’s great seal. The edge of the coin has the words HUNDRED CENTS ONE DOLLAR OR UNIT. Supposedly, edge lettering was used back then because people would shave off some of the edge without being detected in order to accumulate the silver.

In 1804, dollars were accidentally minted with 1803 on them. As demand for smaller denominations occurred, the mint stopped minting dollars in 1804 and was made official in 1806 by then Secretary of State James Madison.

In 1834, Edmund Roberts who was a US envoy to Asia, was looking for items to give to the leaders of some of different Asian nations as he was negotiating treaties between them and the US. Previous attempts of giving gifts were not of high enough quality for Kings or Sultans. Roberts wrote a letter to the Secretary of State with an idea of sending them a complete set of US silver and gold coins. The Secretary of State agreed as would President Andrew Jackson and wrote a letter to the Mint Director saying: “The President has directed that a complete set of the coins of the United States be sent to the King of Siam, and another to the Sultan of Muscat. You are requested, therefore, to forward to the Department for that purpose, duplicate specimens of each kind now in use, whether of gold, silver, or copper.” One problem, no silver dollars were minted since 1804, but the US government gave the ok to start minting them again in 1831. So, they decided to mint some but use what would have been the next date if they hadn’t stopped making them, 1804.

Roberts started his journey to Asia in 1835 with the collections and reached Muscat and Oman (now Oman) in October and Siam (now Thailand) in April, 1836. Before he reached any other nations, he passed away on June 12, 1836 and the remaining sets were returned to the US. These 1804 dollars are known as Class I (had lettering on the edge) and only 8 are known to exist.

Class II and III coins were supposedly minted in the 1850s. The only Class II known to exist has no lettering and is part of the Smithsonian coin collection. Class III is similar to Class I and only 6 of them are known to exist.

How much are they Worth?

As you can imagine, there have been counterfeits and reproductions produced since the 1860’s. Some silver dollars between 1800 and 1803 were altered to look like 1804. Can you imagine what had to be done to alter the last digit with a 4, and get away with it? Counterfeits were sold to military personnel during the Vietnam War. They were called ‘Saigon copies’.

The 1804 Silver Dollar is considered the granddaddy of all US coins. Wouldn’t you like to have one of the 15 out there? Unless you have a spare million or five, the best you can do is see one.

Though you and I may not ever obtain an 1804 silver dollar, you can search for other Silver Dollars

4 thoughts on “The Infamous 1804 Silver Dollar”