As an adult coin collector, I have had a few goals. Years ago, I wanted to put together a Franklin Half Dollar

collection because I thought it would be simple, and I was right. It took a little time, but I got all 35 half dollars and 1955 to 1963 Philadelphia Halves are mirror like proofs.

Then I wanted to put together a Wartime Jefferson Nickel 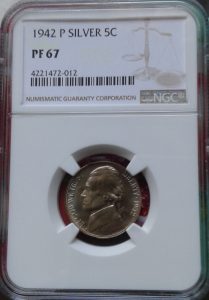 To make it more interesting, I would get all nickels certified MS-67 which is one of the highest grades you can get for these. I occasionally will find an MS-68, but expect to pay over $1,000 for one in this grade. With MS-70 considered a perfect coin, you can imagine that an MS-67 or 68 coin would be beautiful. I decided to get all the Nickels that were certified by NGC which is a very reliable company. When I got all 11, my friend suggested I include the 1942-P Proof Silver Nickel. So, last November, I went to the New Hampshire coin show to find this Proof in the same grade as all the other, 67. I found 2 in Proof-65 and one in Proof-66. I was considering getting the 66 Proof, but I thought it was priced a little higher than it should be. I kept walking the aisles and when I had been to most of the dealer tables, I finally found a Proof-67 coin, seen here. Patience paid off and now I have a real complete set. 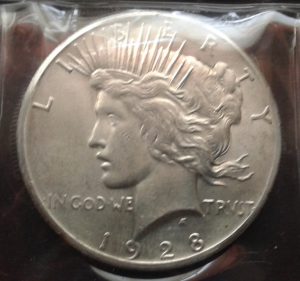 Now, I am attempting to complete my Peace Dollar

collection. Between 1998 and 2001, I collected 23 out of the 24 Peace Dollars. Before I could get the last dollar, I was laid off of work. I didn’t start collecting again until 2015. So, my latest goal is to get that last one. Unfortunately, the price for it has increased considerably, but I’m determined to get it in the next few months.

Just like most things you like to do, it’s good to have a set of goals. I remember when my friends and I started to collect in our teens. We all had the Lincoln Cent

and Jefferson Nickel blue Whitman folders, and our goal was to fill all of the holes in those folders. The first Lincoln Cent folder went from 1909 – 1940 and the second one from 1941 – 1974. The second folder was easy to do, but the first one, not so much. I was just looking at that folder and am missing a dozen of those early cents. Of course, if I ever got the key date cents like the 1909-S VDB or the 1914-D, I wouldn’t put them in there. My mom had two glass piggy banks, one

Do you have any coin collecting goals? Let me know what you’re interested in?

Is the US Mint thinking about the Collector?
My Coin Collecting Beginnings
Not Sure Which US Coins to Collect
Which is your Favorite US Coin

4 thoughts on “The Goals of a Coin Collector”