As 2020 comes to a close, one historical event still remains, the arrival of the Pilgrims to America in 1620. In November 1620, they landed in what is now known as Provincetown, MA at the northern tip of Cape Cod. It wouldn’t be until December that Plymouth would be founded. If you do have a chance on visiting Plymouth, don’t be shocked when you find Plymouth Rock. It has been chipped away over the years and on occasion vandalized with spray paint. Still, Plymouth and Plimouth Plantation are worth visiting.

1920 was a big year for Congress passing United States Commemorative Half Dollars including an Alabama Centennial and a Maine Centennial. On March 23rd, US Representative Joseph Walsh from Massachusetts introduced a bill to commemorate the Tercentenary of the Pilgrim landing. There were plans for observances and events throughout Massachusetts in December, especially Plymouth. What would be better than having a commemorative coin to reflect the Mayflower landing? 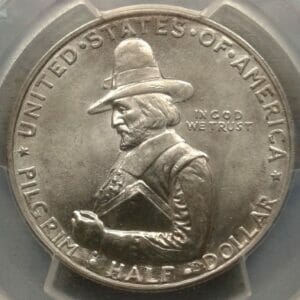 The bill mentioned producing 500,000 coins. When asked about this, Representative Walsh stated that this was a 300th anniversary would be more important than the Alabama and Maine coins that would only be 100th anniversaries. Alabama became a state in 1819 and Maine in 1820. At the time the price of silver was on the rise, making a request to reduce the amount from 500,000 to 300,000.

All three commemorative bills were sent to the US Senate on May 5th. It was first opposed, but eventually would be approved, and President Woodrow Wilson signed them on May 12th.

The obverse of the 1920 coin would have a profile of William Bradford holding the Bible. Bradford was the first to sign the Mayflower Compact and the 2nd Governor of Plymouth. At the bottom of the coin would be the words “PILGRIM HALF DOLLAR”. The reverse would be a design of the Mayflower with the words “PILGRIM TERCENTENARY CELEBRATION” and the dates “1620 – 1920” around it. Both sides of the coin were designed by Cyrus Dallin. 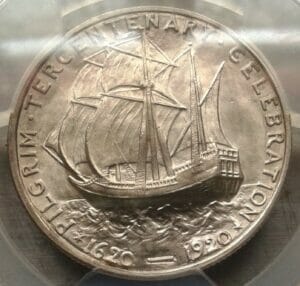 The Philadelphia Mint would mint 200,112 silver half dollars in October 1920. Since they were all minted in Philadelphia, there would be no mint mark on the coin. The half dollars would be the same diameter as the current circulated Walking Liberty Half Dollar and would be 90% silver and 10% copper.

The US government didn’t actually sell these commemoratives. That task was given to the Pilgrim Tercentenary Committee and all profits would go toward events honoring the historic landing. The coins were sent to the National Shawmut Bank in Boston. Even though they were half dollar coins, the bank sold them to the public at $1 each.

At the time, the United States and other countries were going through a recession after World War I which resulted in a number of coins not being sold. So, the Pilgrim Tercentenary Committee returned 48,000 of the 1920s and 80,000 of the 1921s to the mint where they would be melted. That makes the 1921 a rarity as only 20,000 of them exist. It could be even less depending on how many more have been melted since 1921.

The Royal Mint produced a 25 pound gold coin and a 2 pound silver coin. As the beginning of the Pilgrim’s journey began in England, the reverse has a design of the Mayflower going through the rough seas with the North Star as their guide. As with all modern British coinage, the obverse will have a profile of Queen Elizabeth II.

The United States produced a $10 gold coin and a silver medal. The obverse of the gold coin shows a Wampanoag family seeing the Mayflower in the distance and the sun. The sun was included as the Wampanoag tribe was known as the “People of the Dawn”. At the top is the word is the name of their village, “Patuxet”. The reverse shows a Pilgrim couple with Mayflower blossoms on the left and right side and the name of their village at the top, “Plymouth”. The obverse of the silver medal displays a Pilgrim couple with the Mayflower and the Mayflower blossoms. On the top is the phrase “A Civil Body Politick” which means a group of people governing themselves. This symbolizes what would become the Mayflower Compact. The reverse of the medal shows a Wampanoag couple working on their crops. The phrase on the top “Sustainers of Life” symbolizes how the Wampanoags taught the Pilgrims how to plant and harvest their crops.

They will be sold as follows:

They Could Sell Out In One Day

With these low mintages, they could be sold out on November 17th, but who knows. Do any of these coins or sets sound interesting to you?