going to auction in Bonham, LA on September 6, 2016. Now $60,000 sounds a bit low for one of these, but reading further into the article, I saw this from the director and banknotes of Bonhams, Paul Song saying the piece “carries a lower estimate than the other coins because of wear to its surface—it was apparently used as a piece of jewelry for many years“. Now it makes sense. Let me explain this by giving the Brief History of the US $4 Gold Piece or Stella as most people knew it as. 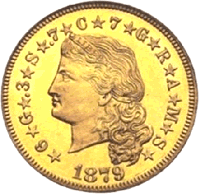 The idea behind having a $4 Gold Piece started with John A. Kasson, US plenipotentiary (diplomat with full authority to transact business on behalf of the United States) with Austria-Hungary.  It was suggested to create a pattern coin that the US could use toward joining the Latin Monetary Union. The LMU existed from 1865 to 1927 and was meant to merge different European currencies into one currency, similar to the Euro today. The intention was was to have a bimetallism system of gold and silver based on the French Franc. The United States entry would be a gold coin similar to the twenty franc Napoleon. However the Gold Coin

did not meet LMU standards based on weight and gold content. 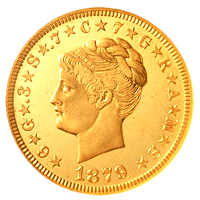 There would be two different obverses released, one with a woman with flowing hair designed by Charles Barber, the other with coiled hair designed by George T. Morgan. Around the woman would be letters and numbers with stars in-between, ★6★G★.3★S★.7★C★7★G★R★A★M★S★. This stood for 6 grams of gold, .3 grams of silver and .7 grams of copper for a total weight of 7 grams.

The reverse was the same on both coins. In the middle was a star with the inscription ONE STELLA 400 CENTS. Now the word Stella came from the Latin word for star. Around the star was the usual E PLURIBUS UNUM and DEO EST GLORIA (Latin for “To God is the glory”) .

With all the Latin included on the coin, it was obvious they were trying to include this coin with the LMU, but in the end, Congress rejected it. Hundreds of the Flowing Hair version proofs (425 of which are known to exist) were made in 1879 as well as a few Coiled Hairs. There were also a few proofs of both versions made in 1880, but that was it. 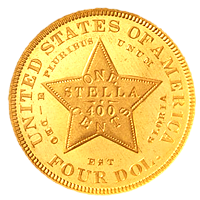 Stellas did not have a good reputation. This included that some were used as jewelry by women at Washington DC’s bordellos. After 1880, the idea of Stella coins disappeared and the $4 Gold Coin

was never minted in the US again.

Want to see a Stella in person?

Unless you can attend one of those high priced auctions like the one coming up in September, your best bet would be visiting the Smithsonian Institution in Washington DC. There, you can find some of the rarest coins in the United States including the 1804 Silver Dollar, 1933 Double Eagle and the 1913 Liberty Nickel.

Now the Moment We have all been Waiting for

In the beginning of this post, I spoke about a $4 Gold Piece that is expected to bring in $60,000. I mentioned that I thought it was low but I don’t know what grade it has been given, just that it’s worn.

Here are some Stellas that have been sold at auction and what they sold for:

Amazing, isn’t it. Wouldn’t you want one of these?