Back in the beginning of my coin collecting experience, the rarest Kennedy Half Dollar was the 1970-D. In fact, the Whitman folder I had for Kennedy Half Dollars had a covered hole in its spot with the note “Only in Mint Sets”. 1970 was the last year that half dollar had 40% silver (not including the 1976 bicentennial) and Denver was the only mint branch to mint them. However, none of them were released in circulation and only ended up in the yearly Mint Set. So, there were only 2,150,000 1970-D Kennedy Half Dollars minted.

As I got older, I learned of an error coin from 1974 which coincidentally was also from Denver. Some 1974-D Kennedy Half Dollars have a doubled die on the obverse of the coin. It’s supposed to be most noticeable on the “RUS” in “TRUST”. I won an auction from EBay back in the 1990s and got one certified by NGC in grade MS-64. With the naked eye, it’s tough to see. You definitely need to use magnification to see it. In a way, it is rare, but it is the common error for the Kennedy Half Dollar collection. 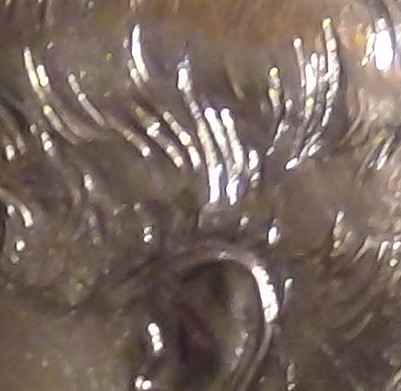 Shortly after that, I found out there was a rarity in the early proof 1964 Kennedy Half Dollars. The first 3 to 5 percent that were minted had accented hair above the ear. President Kennedy’s wife, Jacqueline, did not like how it looked and wanted it changed. So, the mint thinned out the hair in that area and that was the way proofs would look until the late 1970s. With just under 4,000,000 proof half dollars minted that year, the number of Accented Hair proofs minted ranges somewhere between 120,000 and 200,000. That makes it rarer than the 1970-D I remember as a child.

So, What’s the Rarest Kennedy Half Dollar? 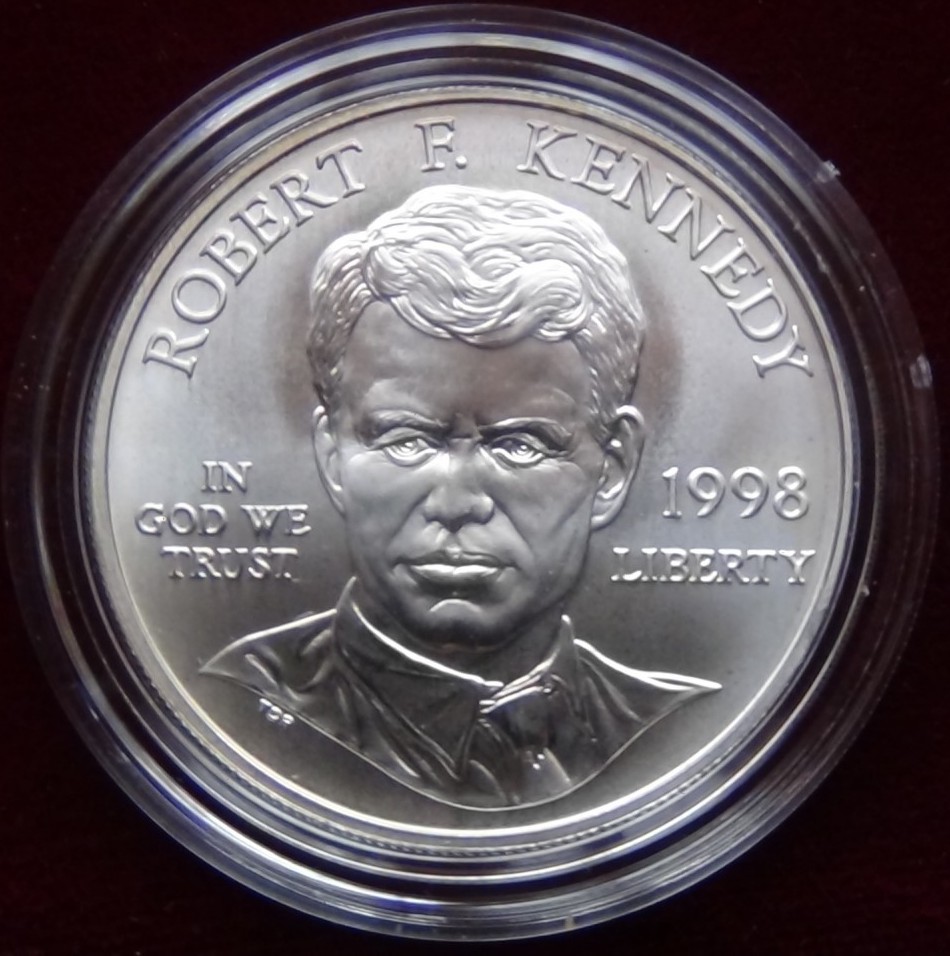 If you guessed it was the Gold 50th Anniversary Half Dollar from 2014, you’re close. There were 73,000 of them minted at West Point, making it the 2nd rarest Kennedy Half Dollar,

At only 62.500, the rarest one is the 1998 Matte Proof silver half dollar from the San Francisco mint. It was only included with the Uncirculated Robert F. Kennedy Commemorative Silver Dollar in a 2-coin set known as the Kennedy Collectors Set. The Robert Kennedy Commemorative was released on the 30th anniversary of him being shot in 1968 by Sirhan Sirhan at the Ambassador Hotel in Los Angeles. Kennedy was running for the Democratic Candidate for President, and Sirhan shot him because he said Kennedy was a supporter of Israel and once President was going to send bomber to bomb Palestinians. 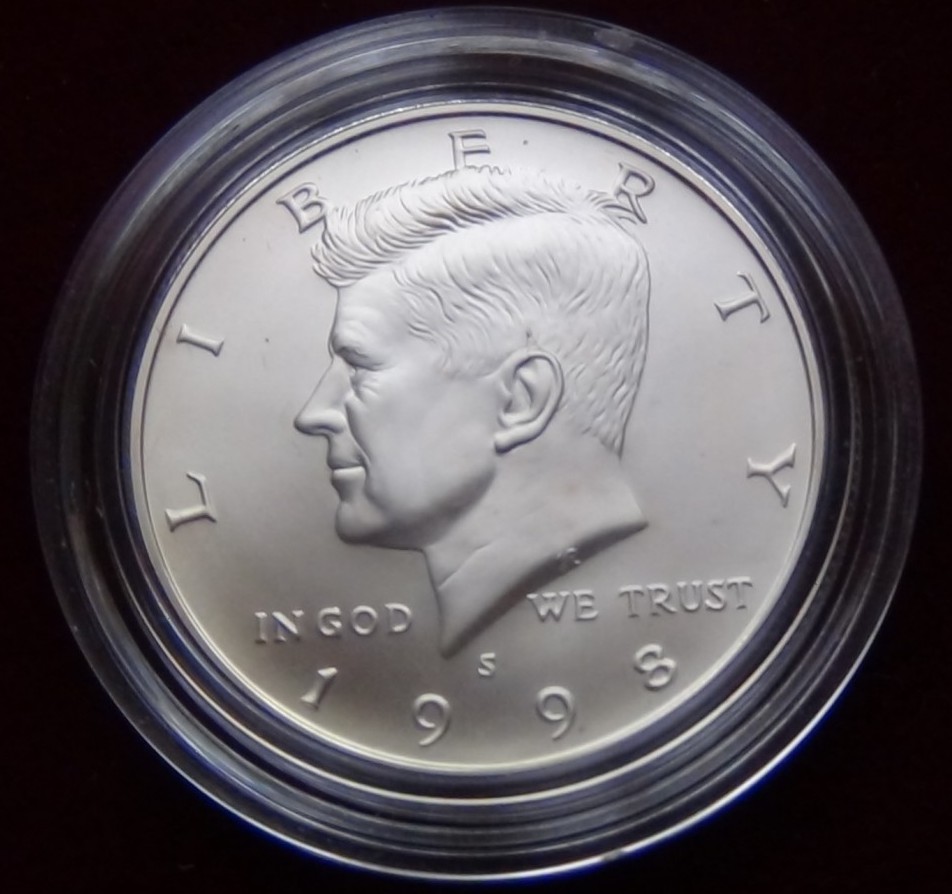 Matte Proofs originated in Europe in the late 1800s. Instead of using polished dies, they would use unpolished dies and sandblasted them. The US Mint started using these unpolished dies on gold coins in 1908, but weren’t popular because people liked the polished proofs over these new dull looking ones. Some early Lincoln Cents

had Matte Proofs, but by the time Proof Sets started coming out in 1936, coins would return to the polished designs. I’m not completely sure, but I think this 1998-S Matte Proof half dollar was the first time since the 1920s that the US Mint tried using the unpolished dies. When collectors found out about the Kennedy Collectors Set, it sold out fast from the mint.

By this time Kennedy Half Dollars were not used much in circulation, except casinos until they started using chips and tickets in place of them. Seeing the reduction of usage, the US mint stopped releasing them in circulation in 2002, only seeing them in Mint and Proof Sets. This reduced the production of Kennedy Half Dollars by around 90% as a result, but still not as rare as the 1998-S Matte Proof.

2014 would see more Kennedy Half Dollar Collectors Sets to commemorate its 50th anniversary. One set had High Relief Uncircluated half dollars from Philadelphia and Denver and only 150,000 were released. The second set was the Gold Kennedy Half Dollar I mentioned earlier. In the final set, each mint would release a silver half dollar with a different finish: Philadelphia had a proof finish, Denver had an uncirculated finish, San Francisco had an enhanced uncirculated finish, and West Point had a reverse proof. There were 219,000 of those sets minted.

As I write this, the 1998-S Matte Proof is still the rarest of the Kennedy Half Dollars. Shortly after they were sold 20 years ago, they were valued between $300 and $450. The value has gone down as have many Kennedy Half Dollars. Right now, it’s valued at $150, which is still more than the $59.95 I paid for the set which included the Silver Dollar Commemorative. So, that’s a plus. If you were considering getting it, now would be the time, especially with silver being low. Would you consider getting the rarest Kennedy Half Dollar?

8 thoughts on “Rare Kennedy Half Dollar”