. As of this posting, there hasn’t even been one seen in public. It’s like the Holy Grail of modern US coins. Every collector wants one, let alone see one. 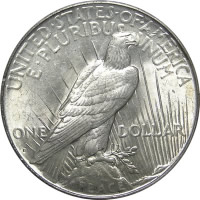 Peace Dollars were minted between 1921 and 1935. Like the Morgan Dollar, a number of them have been minted and these 24 coins could be a good investment, especially if silver rises. The US mint was thinking about minting them in 1936, but in the midst of the Great Depression, there wasn’t a demand for them and the Peace Dollar was done, or so we thought.

In 1964, Congress approved the minting of 45 million Peace Dollars to avoid shortages, especially at banks. Many thought this would not cover what was need. Also, the price of silver had rose during the 1960’s and there was fear that people would hoard these new dollars. There was considerable controversy, but on May 12, 1965, production began in Denver. The silver dollars would still have the year 1964 on them and would also be 90% silver like the dollars before it. A total of 316,076 dollars were minted before they were told to stop on May 24th. It was decided that these would not benefit the people or businesses that would have needed it the most, and the order came through to destroy all of them. As far as the US Mint was concerned, all 1964-D Peace Dollars were melted, but there were rumors that some may have made it out, possibly by mint employees.

To make sure this didn’t happen again, the Coinage Act of 1965 was signed by President Lyndon Johnson on July 23, 1965 to stop production of silver dimes and quarters and reduce the silver in half dollars. Dollars would not be considered again for 5 years, and by then, 90% silver coins were long gone from circulated coins.

out there, since they were never officially released in circulation, owning them would be an illegal offense. This is the reason we may never see an authentic one. However, there are a number of counterfeit ones out there. If someone was brave enough to bring one to PCGS, they would definitely authenticate it before paying the owner $10,000.