Skip to content
Home » My Collection » My Change Box

Until recently, I put change on the table or the top of a cabinet, and sometimes forget to keep them and end up including them with my regular change. D’oh! Well, I found a plastic box and decided to use that for change I don’t want to spend. Here are some of the coins I have put in this box.

There are times when I put quarters into a washing machine, but it won’t start. I take them out only to find out one is Canadian. Since I can’t use it, I save it. My mother gives me what she thinks is a nickel. Turns out it is a Cuban 5 Centavos coin from 1920. I’m don’t normally collect foreign coins, but if I find them, I’ll keep them.

A collector coin is a coin that was never meant to be used in circulation. For example,

commemorative coins, proof sets and mint sets that are sold from the mint are meant for collectors. The two America the Beautiful Quarters

displayed here were minted in San Francisco and were only minted for collectors. However, I found these two in a coin roll. It’s unfortunate because putting them out in circulation brings the condition to a lower grade, making them worth less.

On occasion, I will find a silver coin in change. The most common ones are the Jefferson Nickels 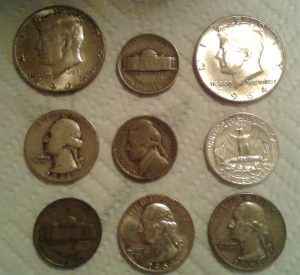 from 1942 to 1945. Most of the time, these nickels are seen in circulation with a darker grey color than the other nickels. Then, there are 90% silver Roosevelt Dimes

When I was a kid, I would find Wheat Cents

which were Lincoln Cents minted before 1959. Today, I don’t see them as often. So, I try to keep them when I find them. As well as the silver Jefferson Nickels, I find some others before and after them. I also find some Buffalo Nickels minted between 1913 and 1938, but most of the time, the year is worn out. Without the year, they are only worth…a nickel, but still cool to keep them.

Nowadays, half dollar and dollar coins are not released in circulation. So, finding them in change is rare, but not impossible. In the past 40 years, the US had 4 different dollars: Eisenhower

. Quarters are more plentiful and with many reverses. Statehood Quarters came out from 1999-2008, US Territory Quarters in 2009, and since 2010, America the Beautiful Quarters

Do you have a place or container where you keep special coins like these? I am hoping to add to my change box in the future.

4 thoughts on “My Change Box”