Skip to content
Home » My Collection » More From My Pocket

I thought I would talk about what I found in change recently. It’s nothing that will make me rich. Sometimes I think that going through change is like going through the beach sand with a metal detector. He are some I found in my pockets recently.

There are over 250 million 1954-D Lincoln Cents minted. So what’s the big deal? Well, if you’re a coin collector and have a 2018 Red Book, you’ll see it’s worth 10 cents as are many Lincoln Wheat Cents

Lincoln cents between 1909 and 1982 were made of 95% copper and 5% zinc. With the price of copper on the rise since the 1970’s, it was becoming apparent that the cost of making a penny would be more than…well a penny. I did a search to find out what the melt value would be for a Lincoln Cent 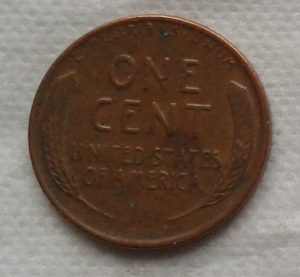 With the above information, the melt value of a cent up to 1982 would be:

There’s two reasons why we probably don’t see many wheat cents in change. Of course there are some collectors who collect Lincoln cents and this is another hole filler for them.

If you’ve read some of my earlier posts, I mentioned Jefferson Nickels

aka Wartime Nickels. These nickels are 35% silver because silver was needed during World War II.  Wartime Nickels have 0.0563 ounces of silver in them. With the price of silver around $17 on November 3, 2017, the melt value is worth around 96 cents. If you have one of these in Very Fine condition, they are worth around $2.

Not bad if you found one of these in change. They are not difficult to distinguish in change as they will be a darker grey color than a regular nickel.

1964 would be the last year that the United States mints would release 90% silver coins in circulation. 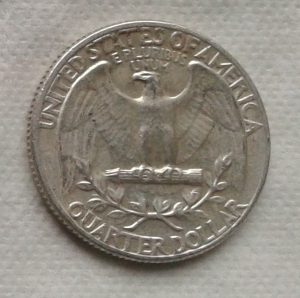 Between the Philadelphia and Denver mints, there were over 1.2 billion 1964 Washington Quarters

minted. That’s a lot of quarters, right? Yet, how often do you find any in change? Well, even back then, with the price of silver on the rise, people were hoarding them. The 2018 Red Book have circulated quarters from 1964 priced around $7 in extra fine condition. If your silver quarter is pretty worn, you could go by the melt value which, for example, would go for $3.07 on November 3, 2017.

Check the reeded edge of the quarter. If it’s all grey, then you have a silver quarter.

Now Put them All Together

I showed you a total of $0.31 in coins. If you go by melt value which would be their minimum worth, they are worth $0.02 + $0.96 + $3.07 = $4.05. A pretty decent profit just checking my change. Granted, I don’t find these coins everyday as more people are holding on to them or selling them to coin or pawn shops that end up getting melted.

So, check your change in your pocket, between the couch cushions or anywhere you have change. You may find some profit in some of those coins.

4 thoughts on “More From My Pocket”