Skip to content
Home » My Collection » Local Medals and Commemoratives 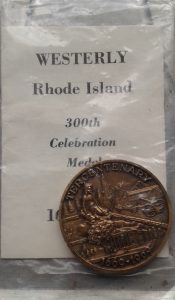 I found this in a drawer about a week ago and thought it would be interesting to speak about. My mom bought both my brother and I one of these medals. I vaguely remember Westerly’s Tercentenary Celebration in 1969 as I was only 3 at the time. There was a parade and there was a capsule buried in Wilcox Park that will be opened in 2019 when Westerly turns 350.

The coin is still packaged in its original plastic with its original pamphlet.  This is the bronze metal that they sold for $2.50. They also sold a silver medal for $10. The obverse of the coin had three things that represent Westerly. On the top right of the coin is a display of one of the granite mills in Westerly. Granite mills began before the Civil War and ended around 1965. Westerly Granite has been used locally, nationally as in Gettysburg, PA and Antietam in Maryland, and globally including Italy. On the top left is a statue of Chief Ninigret which you can find near Watch Hill Harbor. On the bottom is Westerly Town Hall and Court House which was constructed of Westerly Granite.  The reverse has the seal of the Town of Westerly.

. Do you have one from where you live or lived at one time? I’d like to hear about it.

4 thoughts on “Local Medals and Commemoratives”