Skip to content
Home » Coin Sets » Last of the Presidents 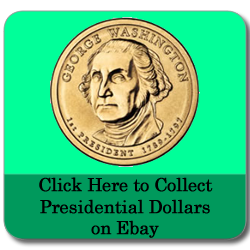 Most people have probably not even seen a Presidential Dollar, partially because the US Mint stopped putting in circulation in 2012. Like the Sacagawea Dollars 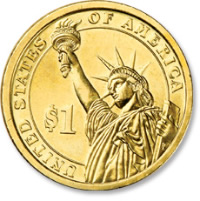 With the popularity of the Statehood Washington Quarters

, Congress passed the Presidential $1 Coin Act of 2005. This bill would allow the US Mint to produce dollar coins of each US President in the order that they served. The Senate and House both passed it and President George Bush signed it into law on December 22, 2005. This bill was passed in hope that the dollar coin could be popular again. Unfortunately, the Sacagawea Dollar was never in demand, but is still being minted as of today.

This new dollar coin would be the same diameter, composition, weight and writing on the edge. Looking at the coin, some people would call them gold dollars because of its color. Sadly, there is no actual gold in these coins. It is composed of 77% copper, 12% zinc, 7% manganese and 4% nickel.

The first coins were minted in 2007 with the first four Presidents and every year after would have four Presidents released except for the last year with the final three. The original obverse of the coin showed the face of the President with his name on top and on the bottom was the numeric order when he was President and the years he was in office. On the reverse, instead of the word Liberty would be a design of the Statue of Liberty. The reverse would remain the same throughout the set. On the edge had the year and mint mark of the coin as well as “E Pluribus Unum” and “In God We Trust”.  At least 50,000 of the George Washington coins are missing “In God We Trust” on the edge making them known as godless dollars. In 2009, “In God We Trust” would be moved to the bottom of the obverse of the coin.

In 2011, the dollar was hardly being used and very few people would consider using them. Vice President Joe Biden would announce the the dollar would no longer be minted in circulation. So, 2012 would be the first year that only collectors could buy them through the US Mint. This way they could finish the set as planned even though it would no longer be seen by the general public.

With the stipulation from the original act of 2005 saying that only deceased Presidents would be included, Ronald Reagan would be the last President on the dollar coin. Presidents Jimmy Carter, George HW Bush, Bill Clinton, George W Bush and Barack Obama were still alive and will not be included. 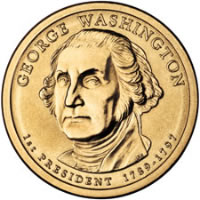 Along with the Presidential Dollars

Three Presidents, Thomas Jefferson, Andrew Jackson and Martin Van Buren served after their wives passed away . So, in their place would be a depiction of Liberty that appeared on coins when these men were President. Jeffersons would be the Draped Bust design, Jacksons would be the Bust Liberty design and Van Burens would be the Seated Liberty design. Chester Arthur’s wife past away before he became President. In her place was Alice Paul, a 20th century suffragist who was born while Arthur was in office. John Tyler and Woodrow Wilson would have two wives during their terms in office. The US mint would issue coins for both wives which would make them end up releasing five coins those years instead of four.

There was some controversy in 2015 about having Nancy Reagan on a coin because she was still living.  Back in the beginning, they weren’t including Ronald Reagan on the dollar coin, possibly because his predecessor, Jimmy Carter was still alive, or that his wife was still alive. In any case, it was agreed to include Ronald Reagan and breaking tradition, Nancy Reagan would be the first living person to appear on a US coin that was not a commemorative. Ironically, Nancy Reagan passed away in March, 2016, a few months before her coin would be released.

Would you Consider Collecting or Investing in these Coins?

Like I said previously, The Presidential Dollars would be more for collectors and the $10 Gold First Lady Coins would be for investors, though some investors are skeptical. However, there have been errors on the Presidential Dollars beyond the early godless coins, especially on the edge. Of course, with errors, there are counterfeit coins, so make sure it is an actual error.

Well, I hoped you liked my post on Presidential Dollars

. After this year, they will no longer be minted. As far as I know, the Sacagawea Dollars

will still be minted next year. What do you think they should put on the dollar in place of the Presidents, not that I know of anything else coming in the near future.

Luck of the US Dollar Coin
Is The US Mint Thinking Of The Collector?

9 thoughts on “Last of the Presidents”