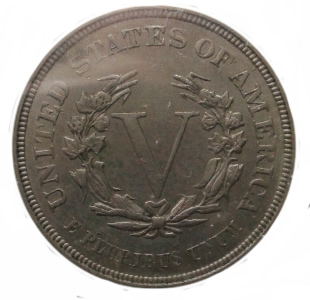 1883 saw the last of the Shield Nickels

and a new nickel design was introduced by Charles Barber who would also design the dime, quarter and half dollar in 1892. The new Liberty Nickel

would have a Roman Numeral V on the reverse to represent 5, but the engraver did not put CENTS anywhere on the coin. This coin would become known as the ‘No Cents’ Nickel or the ‘Racketeer’ Nickel. It wasn’t rare with over 5 million minted, but it has a devious past. 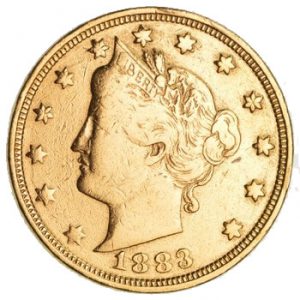 Our story begins with a man named Josh Tatum. The story goes that he noticed that Liberty Nickel and the current $5 gold coin were about the same size. With help from a friend, they were able to convert thousands of Liberty Nickels to $5 gold pieces using a 24-carat gold electroplate. Josh would take these fake gold coins and use them in different stores in different towns. He would buy something worth 5 cents, give the cashier the gold coin, and get $4.95 back. Not bad, huh? After a while, Josh would get caught with these fake gold coins. He was brought to court for fraud, but none of the witnesses could say that he told them they were $5 gold pieces and never asked for change. The case ended up being dismissed because Josh was actually a deaf mute. Some people think this was where the phrase “joshing you” originated.

So, to prevent this from happening again, the US mint added CENTS underneath the V on the reverse. Even though there were three times as many nickels that would include CENTS in 1883, the nickels without cents would still be less valuable.

People tried to fake people even after this by making the nickels look like the Racketeer Nickels. It’s like you’re trying to fake with a fake. Today, there are people selling these fake coins, some for the price of $4.95.

This was probably one of the earliest counterfeit coins in the United States. I have a “No Cents” Nickel in my Type Set as a remembrance of a deaf mute man who might have fooled the US Mint to change a design.