You’ve seen it all over. The phrase “In God We Trust” became the National Motto of the United States in 1956. However, this phrase goes back 150 years to the days of the US Civil War.

Months after the Civil War began, a Minister from Ridleyville, PA, Reverend M. R. Watkinson, wrote to the Secretary of the Treasury, Salmon P. Chase. Here are the contents of the Minister’s letter on November 13, 1861:

You are about to submit your annual report to the Congress respecting the affairs of the national finances.

One fact touching our currency has hitherto been seriously overlooked. I mean the recognition of the Almighty God in some form on our coins.

You are probably a Christian. What if our Republic were not shattered beyond reconstruction? Would not the antiquaries of succeeding centuries rightly reason from our past that we were a heathen nation? What I propose is that instead of the goddess of liberty we shall have next inside the 13 stars a ring inscribed with the words PERPETUAL UNION; within the ring the allseeing eye, crowned with a halo; beneath this eye the American flag, bearing in its field stars equal to the number of the States united; in the folds of the bars the words GOD, LIBERTY, LAW.

This would make a beautiful coin, to which no possible citizen could object. This would relieve us from the ignominy of heathenism. This would place us openly under the Divine protection we have personally claimed. From my hearth I have felt our national shame in disowning God as not the least of our present national disasters.

To you first I address a subject that must be agitated.

Think about how US coins looked in 1861. The Indian Cent

was Liberty with an American Indian headdress. The Three Cent Silver piece had a shield inside a six pointed star. The other Silver Coins, Half Dime, Dime, Quarter, Half Dollar and Dollar had a Seated Liberty on the obverse. The Gold Coins had the head of Liberty. As you can see, with the exception of the small Three Cent Silver, all US coins depicted Liberty. The only wording on these coins were the coins denomination, “United States of America”, and “Liberty”. Rev. Watkinson was the first to write to the US Government about adding God to coins, but wouldn’t be the last. 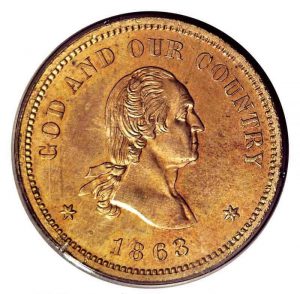 After receiving this letter, Secretary Chase would have the Director of the Mint start working on a motto for coins, but would have one obstacle. Back in 1837, Congress passed an Act stating what could be placed on a US coin including mottoes. This act took out the United States original motto on coins, E Pluribus Unum. To change what can be added to a coin, it would take another Act of Congress. The Mint Director came back to Secretary Chase in December, 1863 with designs for a new one, two and three cent coins with mottoes of either “Our Country; Our God” or “God, Our Trust”. One coin had a depiction of George Washington, something even Washington himself never wanted on a coin. On that coin, Secretary Chase suggested adding “Our God and Our Country” as the motto. Another coin had a shield, which the Secretary wanted to include “In God We Trust”. 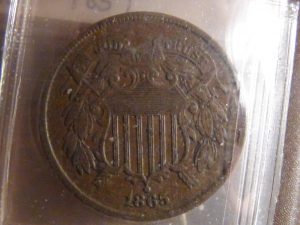 On April 22, 1864, Congress passed an Act to change the composition of the 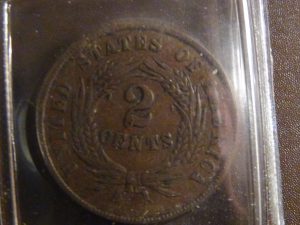 from copper and nickel to a thinner copper coin. It also introduced the new Two Cent Piece

with the shield and the motto “In God We Trust”. It was decided not to add George Washington’s face on any of the coins at this time.

The following year, Congress would pass another Act that would allow the motto on all Silver and Gold Coins that “shall admit the inscription thereon.” The new Three Cent Nickel

in 1865 would not include the motto, possibly because of the small size, but the new Shield Nickel 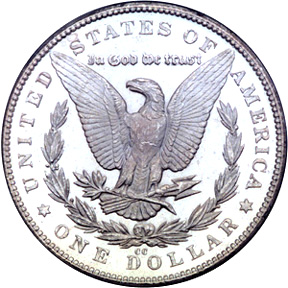 inscribed on such coins as shall admit of such motto.” Designer Charles Barber introduced the Liberty Nickel in 1883 without the motto. He wouldn’t include the motto on his Dime, Quarter or Half Dollar minted between 1892 and 1916. The Lincoln Cent would become the first cent to include “In God We Trust” and the Mercury Dime

would include it starting in 1916. With the Morgan Dollars

including the motto since 1878, that would leave only the nickel. The Buffalo Nickel came out in 1913 with the national motto, “E Pluribus Unum”, but no “In God We Trust”. It wouldn’t be until 1938 when the Jefferson Nickel would finally include it.

How the Civil War Impacted US Coins
Phrases from US Coins

4 thoughts on ““In God We Trust” Started With Coins”