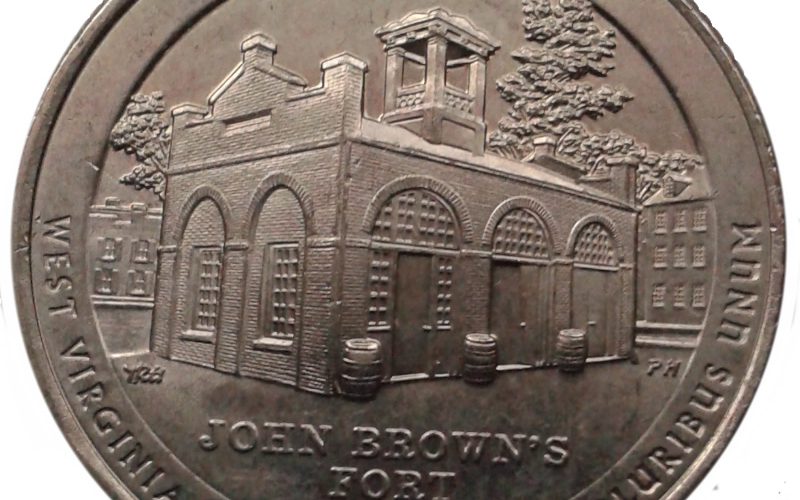 Last week, I got a roll of quarters and found the latest National Park Quarter that has been released. In a previous 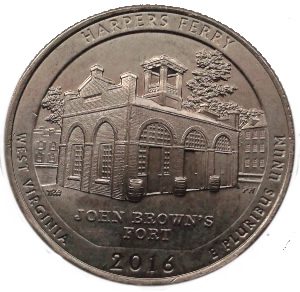 post, I spoke about buying a folder of National Park Quarters

from 2010 – 2021. Today, I add my newest quarter, the Harpers Ferry Quarter. This is West Virginia’s entry and the 23rd quarter in the set. Of course, it is one minted from Philadelphia.

Harpers Ferry is located where the Shenandoah River meets the Potomac. It is where West Virginia borders Virginia and Maryland. Of course, back in the 1700’s when West Virginia was part of Virginia, there was a ferry there to take people from Virginia to Maryland started by Robert Harper.

The building on the quarter was originally the fire engine house for the United States Armory and Arsenal that was built in Harpers Ferry. In 1859, well known abolitionist John Brown, along with 21 men, raided the arsenal to arm slaves. However, it was unsuccessful and most of the men fled or were killed. Many believed this raid helped to start the Civil War two years later. John Brown would never see the beginning of the Civil War as he would be tried and found guilty, and hung on December 2, 1859. After the raid, the fire engine house would be known as John Brown’s fort.

Being a strategic location for the Civil War with the river crossing and the railroad going through, Harper Ferry would be captured between the Union and Confederacy as many as eight times. The Union tried to capture the arsenal, but failed and the Confederacy moved the equipment to Richmond.

In 1944, the National Park Service made the majority of the town of Harpers Ferry into a National Park. The town never had many inhabitants. It hasn’t had over 1,000 people since the Civil War and as of the 2010 census, there are only 295 people that call Harpers Ferry their home. The Appalachian Trail goes by here on its way to Maryland.

. A lot of history in this town. What do you think about the National Park Quarters

? Do you think they are worth collecting?