Skip to content
Home » Research » Half Dimes vs Nickels

If you have heard of Half Dimes

, you may wonder why there were both half dimes and nickels in the US? They were both worth 5 cents. So what’s the difference? 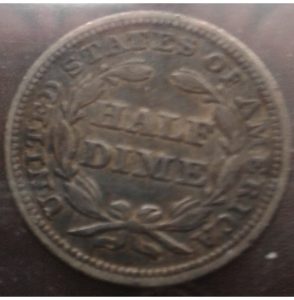 Half Dimes were around back in the beginning of US coins. In fact, the half dime was the first coin minted back in 1792. It was called a Half Disme (pronounced deem), and helped begin the US coin system. The Half Dime would resume in 1795 (with some dates marked 1794).

Half Dimes were made of mostly silver and weighed half as much as dimes back then at 1.35 grams. At 16.5 millimeters in diameter, they would be the smallest circulated denomination coin in the US at the time. The Half Dime would flourish up until the Civil War when people started hoarding their silver coins. This had the government make changes including a copper Two Cent Piece

in 1865.  After the Civil War, less Half Dimes were being produced.

would never return to circulation. 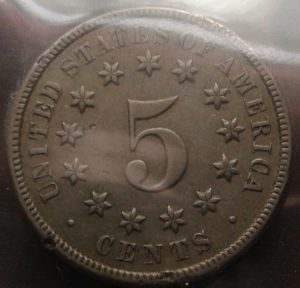 As noted above, the Two Cent Piece and Three Cent Nickel came out during the Civil War, but in 1866, a new denomination would be released, the Nickel. In the US Government’s attempts of eliminating the silver hoarding during and after the war, they decided to make a coin made of 75% copper and 25% nickel. It would be bigger in diameter and thicker than the dime, but would have a smaller denomination at five cents.

So, between 1866 and 1873, the US would have two coins that were worth five cents: the Shield Nickel

and the Seated Liberty Half Dime. However, to get the nickel used more, they would produce millions of the Shield Nickel

and less than a million of the Seated Liberty Half Dimes each year. The Coinage Act of 1873 was a way to eliminate it since they were trying to get US into a gold standard and reduce the silver coinage.

The nickel has survived since then. In fact, this year marks the 150th anniversary of the US Nickel and it’s still going strong. Ironically,  the nickel would contain silver for a short period of time. During World War II, when nickel was in demand, they made the nickel with 35% silver from 1942 – 1945. After that, it would never see silver again.

So Which One do you Prefer?

was small and thin, but did have silver. The nickel is bigger and thicker and easier to obtain. Which one do you like better?

4 thoughts on “Half Dimes vs Nickels”