US Commemoratives were minted to honor a certain person, event or place. They were not meant for general circulation, but as a means to raise money for a particular group or item or to not have to raise taxes for a local area. You would usually get them at the place honoring them. Most of the coins were silver half dollars, but there were other denominations in silver as well as gold. The first commemorative came out in 1892 to commemorate Christopher Columbus’s 400th anniversary of discovering the new world. This would also be the first coin to have an actually person on the obverse. This wouldn’t happen in the regular circulating coins till Abraham Lincoln in 1909.

from 1892 – 1954. With all the commemoratives coming out in the 1920’s and 1930’s the mint decided to cut down and finally stop producing them in 1954. The mint would not produce another commemorative until 1982 with the 250th Anniversary of George Washington’s birth, but I’ll talk about that in another post.

The following are silver half dollars unless otherwise noted. 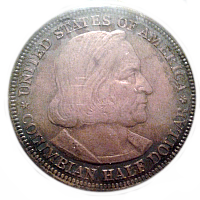 Consider building a set of US Commemoratives?

A set of the silver halves would be interesting, but tough. While some had over a million minted, others only had mintages in the thousands.

9 thoughts on “Early US Commemoratives”