Skip to content
Home » Research » Denver to a Coin Collector

Denver is one of four US Mint branches currently minting coins, along with Philadelphia, San Francisco and West Point.

I always thought the Philadelphia Mint was the highest producer of coins in the world, but it is actually the Denver Mint that produces more. If you look at circulating coins since the mid 1950s, Denver has been minting more than Philadelphia. Another thing I didn’t realize is that you can only visit the Philadelphia and Denver mints. San Francisco had allowed public tours until the 1970s and West Point has yet to allow public tours.

Not surprisingly, Denver began as a mining village from the Pike’s Peak Gold Rush. It was originally named Denver City in 1858 after then Kansas Territorial Governor James W. Denver. In 1861, parts of the Nebraska and Kansas Territories became Colorado Territory and Denver City would be the county seat of Arapahoe County. Six years later it would be the territorial capital and by 1881, it became Colorado’s state capital and its name shortened to Denver. Even though a Mint Branch would be started in Carson City, Nevada and gold found in the Rocky Mountains, Denver would not mint coins, at least not yet.

The US Government Comes to Denver

With miners finding gold, the United States Mint opened an office in Denver City in 1863 as an Assay Office. However, the gold brought there would not be used to produce coins because of the Indian tribes in the area and the Civil War.

Through the years, there was hope to have a Mint branch in Denver. So much so that they purchased land to use as a branch in 1896, and even started building it in 1897. They would have issues in the beginning, but by 1904, they were able to move the assay office there.

Finally, on February 1, 1906, The Denver Mint was born and would produce 167 million silver and gold coins in the first year. It would not mint its first cent until 1911, first nickel until 1912 (last year of the Liberty Nickel), and first dollar in 1921 (last year of the Morgan Dollar). To distinguish from other mints, Denver coins would be minted with a “D” mint mark. The “D’ mint mark was previously used in Dahlonega, GA when it minted coins between 1838 and 1861. In 1909, the US Mint would stop minting coins in New Orleans, leaving Philadelphia, Denver, and San Francisco as mint branches.

Fun fact: With Denver minting them in 1921, the Morgan Dollar would the only non-gold coin to be minted by five mint branches – Philadelphia, Denver, San Francisco, New Orleans and Carson City.

The early decades of the Denver Mint showed them producing significantly fewer coins than Philadelphia. Some key dates minted in Denver include the 1914-D, 1922-D and 1924-D Lincoln Cents and the 1916-D Mercury Dime. 1938 would be the last year to have a circulating coin under one million minted, the 1938-D Walking Liberty Half Dollar. 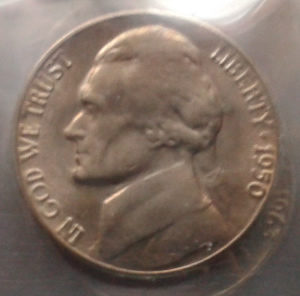 The Denver Mint building was added to the National Registry of Historical Places in 1972.

You Can Visit The Denver Mint

The only time I made it to Denver was to transfer planes. So, I haven’t made it to the Denver Mint yet, but it’s on my coin bucket list.

Hopefully, if you do get to Denver, you can go to West Colfax Street at Delaware Avenue and visit it. They have 45 minute tours of the facility and of course, a gift shop. I’m sure the rules are the same as the Philadelphia Mint. Don’t plan on taking pictures or bring in food and drinks. Since it’s a Federal building, don’t expect to visit it on Federal Holidays. Don’t forget to visit the gift shop when you’re done.

Do You Collect Coins From Denver?

A few years ago, I bought an America the Beautiful Quarters album. Inside this album are holes for each Philadelphia and Denver quarter from 2010 to 2021. As I write this, I have all Philadelphia quarters from 2010 to 2019 except one. However, I am missing twenty four from Denver. This means I have not acquired around half of the Denver quarters. One reason for this is location. Living in New England, I am around five hours drive from Philadelphia. So, even though there are more coins being minted in Denver than Philadelphia, I am seeing more from Philadelphia. If I probably lived in St. Louis or Los Angeles, I would bet I would see a lot more Denver coins than I do here.

So, how about you. Do you see many coins from Denver where you are? Do you collect Denver coins?