Skip to content
Home » Investing » Could Silver Reach $100 an Ounce?

If you’re like me, you were disappointed with the fiasco of the pre-sale of the first two Morgan Dollars on May 24, 2021. With the small supply of each dollar (175,000 minted) and huge demand, the US Mint was going crazy with orders. I’m wondering why the small mintage and one person could order up to 10. It’s crazy, right? Who knows how many people tried to order on the website? Turns out there was a reason for the small mintage.

The US Mint Is Running Out Of Silver

After the pre-sale of the two Morgan Dollars, the Mint sent out two email to its buyers explaining the situation. They gave two reasons:

As a result, the pre-sale of the remaining Morgan Dollars and Peace Dollar have been postponed. It makes you wonder about silver bullion that will come out this year.

This Isn’t The First Time We’ve Seen A Shortage

The Mint saw a shortage of silver in the early 1960s. After all, silver coins were in circulation since the 1790s. Originally, we got silver from other nations until we found our own. There was talk of bringing back the silver dollar, but it was not to be. This introduced the Coinage Act of 1965 which removed silver from all circulating coins except for the Kennedy Half Dollar which was reduced to 40% silver.

There were other times we would see a shortage including the hoarding of silver during the Civil War and Great Depression. These were the reasons for the new Nickel coin in 1866 and the end of the Peace Dollar in 1935.

Where is Silver Used?

Believe it or not, coins and medals rank second in terms of where silver is being used in the United States. Unlike back in the day when silver coins were released in circulation, today’s silver is mainly seen by the collector. You can get a Silver Proof Set or American Eagle Dollars from the Mint as well as silver Commemorative dollars and Presidential medals.

The number one area where silver is being used is in the electronics field. You can find silver in light switches and microwaves. Even the car you drive contains silver.

Silver can be found on solar panels, soldering and photography. Silver is used in many places not just in the United States, but around the globe. This helps make silver even scarcer. 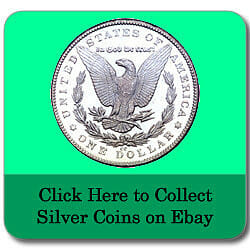 There are some who say that this will not happen, while others believe this will happen in time.

Let start with the glass half empty crowd. They will say it could spike up again, but just as history has shown, it won’t stay up for long. On January 18, 1980, silver reached its all time high in the United States at $49.45 an ounce. It has had its spikes throughout history, but has always gone back to a normal level.

If you go by what I mentioned earlier about silver being used everywhere and for many things, you may be one of the glass half full crowd.

I did a search in Google for “could silver reach $100 an ounce” to see what others thought. Here’s what I found:

I even saw a few articles mentioning silver reaching $1000 an ounce. Now I don’t see this happening any time soon. Could you imagine how much gold would be at that point? At least one article was honest about it, and said that silver could be $1000 someday, but not for hundreds of years.

Do You Think About Collecting Silver?

If you ask my opinion, I think it’s a good time to buy silver being under $30 an ounce. It could hit $100 someday, but it will take some time. With the way things have been going recently, we may see that happening by 2030. Then again, that’s just an opinion.

Have you been or are you considering collecting silver? Let me know what you’re collecting.