Recently, I received a comment from a person with Cherokee heritage because I had mentioned in a previous post the man who created the Cherokee syllabary would be displayed on the reverse of this year’s Sacagawea Dollar. So, I thought I should talk about Sacagawea Dollars today. 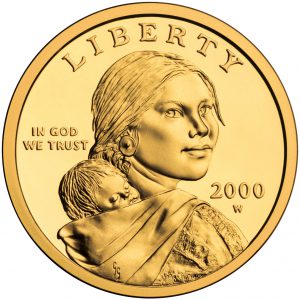 In 1978, Congress decided to stop minting the Eisenhower Dollar and replace it with a smaller coin. The result was the Susan B. Anthony Dollar which the mint started minting in 1979. Unfortunately, the new dollar was not popular from the beginning because the size of the coin was close to the quarter. So, they stopped producing the dollar in 1981.  However, it was decided to produce Susan B. Anthony Dollars again in 1999 for vending machines, especially the ones in post offices.

In 1997, Congress created an act entitled the “United States $1 Coin Act of 1997”. The act stated that the dollar would be golden colored with a distinctive edge and any other qualities that would make people know it was a dollar coin. I think the idea behind golden color and edge came from the success of the Canadian Dollar coin or loonie. Canadians have been using the loonie since 1987 and within two years, the Canadian Dollar Bills stopped being printed.

Though the act did speak of the composition and edge, it did not mention who or what would appear on the coin. A committee was formed in 1998 and after receiving some submissions for the public, they decided on Sacagawea to be displayed on the obverse. However, Representative Michael Castle of Delaware thought it should be the Statue of Liberty instead of Sacagawea. He thought a more popular design would be used more by the public. A poll was presented in November, 1998. The results were 65% for the Statue of Liberty and 27% for Sacagawea. Even though the Statue of Liberty won, Congress accepted Sacagawea. 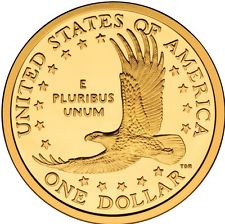 Three obverse and four reverse designs were selected. The design selected for the obverse was Sacagawea holding her son, Jean Baptiste Charbonneau. It was designed by sculptor Glenna Goodacre, who also designed the Vietnam Women’s Memorial in Washington, DC. She used a Shoshone woman, Randy’L He-dow Teton, as a model for Sacagawea, also Shoshone. The reverse displays a soaring eagle with 17 stars, designed by US Mint sculptor and engraver, Thomas Rogers.

To give the dollar its golden collar, its composition would be 77% copper, 12% zinc, 7% manganese and 4% nickel. 5,000 of the dollars had a special finish and were given to Glenna Goodacre. The edge of the coin was plain so it could be distinguished from a quarter. A few of the 2000 dollars with the George Washington display from the quarter on the obverse and the Sacagawea eagle reverse.

The new dollar was released to circulation in 2000. 767,140,000 were minted in Philadelphia and 518,916,000 from Denver. To help promote them, dollar were circulated at stores like Walmart. General Mills would also put Sacagawea Dollars

as prizes in some of their Cheerios cereal boxes.

Even with all the changes to this new dollar, the public wouldn’t use it as the government hoped. In 2001, only 133,000,000 were minted in Philadelphia and Denver combined. In 2002, it was decided to only produce them for collectors. So the dollars between 2002 and 2008 would only be released in sets from the mint. 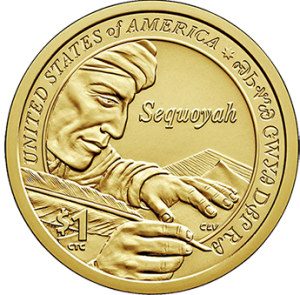 2007 saw the release of the “Native American $1 Coin Act”. This act would move the year, mint mark and “E PLURIBUS UNUM” to the edge. It would also replace the eagle on the reverse to an important act perform by a native individual or tribe in the United States. The first Native American Dollars were released in circulation in 2009, but as they were not used much, the dollar were removed from circulation in 2012. The mint is still including them in mint and proof sets as of 2017. As well as getting approval from the Department of Treasury, the designs would need to be approved by the Committee on Indian Affairs of the Senate, the Congressional Native American Caucus of the House of Representatives, the Commission of Fine Arts, the National Congress of American Indians and the Citizens Coinage Advisory Committee. Here are the reverse designs since 2009:

2012 – designed by Thomas Cleveland – Trade Routes of the 17th Century

2013 – designed by Susan Gamble – Treaty with the Delawares, 1778, first formal treaty between US and a Native American tribe

It may be unpopular to the public, but it’s not going away soon

So far, the Sacagawea/Native American Dollar will be out there at least through 2018, just not to the public. You can still get them through mint sets or at a coin store or show. It seems like a good modern collection to do. Would you consider collecting Sacagawea Dollars

Is There a New US Dollar In Our Future