Well, I’ve made it to my 100th post here, and I said if I made to 100, I would write about the King of US coins, the Morgan Dollar

. Before I start talking about them, let’s celebrate my 100th post with Bella, the Wonder Pup.

I’ve called Morgan Dollars the “King of US Coins” because they are not only popular to collectors, but investors as well. When I go to coin shows, I see many cases of Morgan Dollars. There are people sitting down in front of these glass cases looking at them up close with a magnifying glass. I like Morgan Dollars, but I’m not a big collector of them personally. The one at the top of this post is in my US Type Set book. Of course, I had to include a beautiful Uncirculated Morgan Dollar.

The year 1873 saw the United States in a deep depression which would later be known as the Panic of 1873. As a result, a Coinage Act was release that would no longer allow people who had silver bullion have it struck in to legal tender. This would end bimetallism which allowed a silver and gold standard and just have a gold standard in the US. The Act saw the end of the Two Cent Piece, Three Cent Silver, Half Dime and the Silver Dollar. With some of the smaller denominations eliminated, the mint introduced a new Twenty Cent Piece in 1875. With its closeness to the quarter, the Twenty Cent Piece only lasted two years. 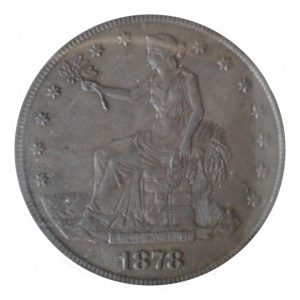 , which had a little more silver than the previous Liberty Seated Dollar, that would only be used in the Far East to compete with the Mexican Dollar. With little success, Trade Dollars would be used here in the United States. Bullion producers would be allowed to use their silver to produce Trade Dollars for a small fee. By 1876, the Trade Dollar was demonetized but continued to be minted until 1878, with only proof coins minted from 1879 to 1885.

In 1876, a bill was introduced that would be later known as the Bland-Allison Act. This act would allow a standard silver dollar again in the United States as well as a new silver certificate. Though President Rutherford B. Hayes vetoed this bill, Congress would override it on February 28, 1878. While waiting for this bill to pass, the Mint’s Chief Engraver, Charles Barber was working on a pattern for the new dollar. If his pattern had been accepted, all non-gold coins, except the cent would had been designed by him by the end of the 19th century.

Meanwhile, a new pattern for the half dollar was being worked on by the new Assistant Engraver, George T. Morgan. Morgan thought of using an actual American woman on the obverse of the coin. A friend of his 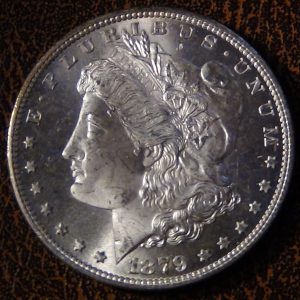 suggested using a Philadelphia woman, Anna Willess Williams. After 5 tries, Morgan decided to use her left profile of the obverse of the coin. The Director of the Mint, Henry Linderman, would request that Morgan design the new dollar instead of the half dollar.

Shortly after the passing of the Bland-Allison Act, the new Morgan Dollar was put into production. The first Morgan Dollars

would be minted in Philadelphia on March 11, 1878. The first minted dollar would be given to President Hayes. To help meet quotas, the new dollars would also be minted in San Francisco and Carson City. New Orleans would start minting them the following year when it reopened for the first time since the beginning of the Civil War. By the second week of production, the number of tail feathers on the bald eagle would be reduced from 8 to 7.

The Morgan Dollar did well until 1890 when Congress passed the Sherman Silver Purchase Act. This would make the government purchase an additional 4.5 million ounces of silver. This helped the farmers who were deep in debt to pay their debts with cheaper money and the miners who were producing a lot of silver. People used the silver notes to purchase gold, depleting the gold reserve. Eventually the demand of silver notes greatly reduced, lowering the price of silver and putting people in a panic. As a result, banks 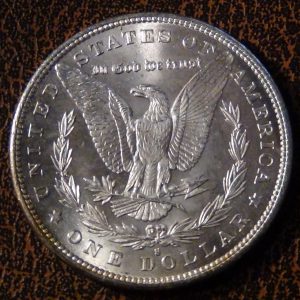 failed, businesses closed, unemployment rose and the country went into an economic depression, later known as the Panic of 1893. President Grover Cleveland, thinking that the Sherman Silver Purchase Act caused the Panic, repealed the Act in 1893, but it was too late. As a result, less Morgan Dollars were minted, especially between 1893 and 1895, and the Carson City mint would be closed for good. By 1898, Congress allowed the remaining bullion acquired by the Act to be minted into silver dollars bringing production up again until 1904 when the silver from this Act was finally depleted. Would this be the end of the Morgan Dollar?

In 1918, the Pittman Act would allow 270,000,000 silver dollars, mostly Morgans, to be melted and sell some of the bullion overseas, possibly helping the Allies during World War I. After 17 years, the Morgan Dollar was minted again in 1921 at Philadelphia, San Francisco, and for the first time, Denver. 1921 would also be the last year of the Morgan Dollar as the Peace Dollar

would be minted by the end of the year.

Years 1893 to 1895 produced some of the rarest Morgan Dollars

. A well known rare date is the 1893-S with only 100,000 minted. Circulating coins could go from $5,000 and $20,000 and uncirculated coins start at $100,000. In fact, each of the four mints minted under a million coins that year, though 1893 coins from Philadelphia, Carson City and New Orleans combined would be worth less than the one from San Francisco. The 1894 Philadelphia had a low mintage like the 1893-S, but worth significantly less. Hey, it still starts at $1,000 in Very Fine condition which isn’t bad. The 1895 Philadelphia would prove even rarer, and very sought after, since they only produced 12,000 business strike dollars.

minted in Denver, but recently had seen commercials on TV about dies and hubs discovered in Philadelphia to produce 1964 Morgan Dollars. Though there had been dies, there is no record that any were actually minted unlike 316,000 Peace Dollars minted and later melted. I’m guessing none were minted because the government was going through a silver shortage and by 1965, silver was removed from Roosevelt Dimes and Washington Quarters, and remained with a shorter amount on Kennedy Half Dollars. By the time Eisenhower Dollars were released in 1971, silver was only included on collector coins from San Francisco.

So Are Morgan Dollars For The Collector or The Investor?

Morgan Dollars could work well for the collector. There are many Morgans that are affordable to build a decent set. Common date circulated dollars could go from $30 to $50 each while uncirculated ones could start at $50. Philadelphia dollars are the easiest to collect, except from 1893 to 1895. Morgan Dollars

are also easy to add to US Type Sets.

Investors could also enjoy Morgan Dollars. Carson City dollars are popular to investors as well as the 1893-S. There are also some San Francisco and New Orleans dollars that are sought for by investors.

Unlike other coins, I believe just about anyone would be interested in Morgan Dollars. Have you or are you considering starting a Morgan Dollar collection?

Acts of Congress
Carson City, To a Coin Collector
Coins As An Investment
The Luck of the US Dollar Coin