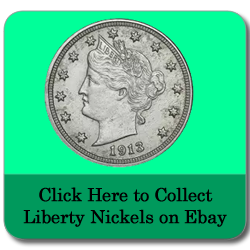 I’ve spoken about many of the United States 20th century coins, but noticed I haven’t mentioned many of Charles Barber’s coins. Charles Barber was the Chief Engraver of the US Mint from 1879 to 1917. He succeeded his father, William Barber, as Chief Engraver. He designed many coins including the Stella $4 gold coin and a number of the early Commemorative coins, but the most popular were named after him: Barber Dime, Barber Quarter and Barber Half Dollar. Prior to these coins he put out a new design for the nickel, known as the Liberty Head or “V” nickel.

During the Civil War, silver was greatly hoarded. As a result, the US Mint would produce a new coin called the Shield Nickel in 1866. This would be the first nickel coin minted in the US. The denomination would be five cents just like the silver Half Dime. However, by 1873, three silver coins were eliminated, the Three Cent Silver, the Half Dime and the Seated Liberty Dollar. With the Half Dime gone, the Nickel would become the only five cent pieces in the United States.

With the government having a surplus of nickels, no non-proof Shield Nickels were minted in 1877 and 1878 and a limited number were produced between 1879 and 1881. Normal production resumed in 1882, but the new Chief Engraver was looking for a new design for the nickel. Barber created a design in 1882 with a “goddess of Liberty” on the obverse and the roman numeral “V” on the reverse. 1883,,, would be the final year for the Shield Nickel as Barber’s new nickel is minted.

On February 1, 1883, the first Liberty Head Nickels were released into circulation. However, there was one thing missing on this coin, the word “cents”. No one thought it was necessary, but they would soon find out how wrong they would be. 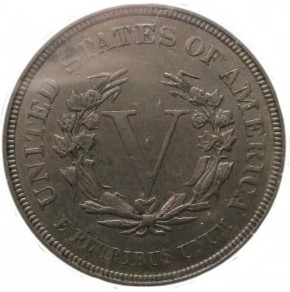 The following is considered one of the most popular counterfeits in the history of US coins. Josh Tatum noticed that this new nickel was close in size to the five dollar gold coin. So he gold-plated the nickels, buy something at the store for five cents, paid with the gold-plated nickel and got back $4.95 in change. For every dollar worth these gold-plated nickels, he would make $99. The perfect crime, at least in 1883. Eventually, Josh was caught and tried, but not convicted. The judge and jury let Josh go because Josh was deaf and mute. Whether this is true or not, they say the phrase “I’m just joshin’ you” may have come from this.

To eliminate counterfeiting the new Liberty Nickel, new ones were minted on June 26, 1883 to include the word “cents” on the reverse. This would be the way it would stay for the next 30 years. Philadelphia would mint Liberty Nickels every year it was out, but Denver and San Francisco only minted them in 1912.

With the beginning of the 20th century, many are looking for new designs in US coins. With the 1890 Congress Act stating that coin designs cannot change within 25 years without Congressional Approval, the Barber Dime, Quarter and Half Dollar were safe until 1916. The Morgan Dollar ceased production in 1904 and wouldn’t resume until 1921. The Lincoln Cent was introduced in 1909. That left the nickel. The same year the cent was changed, the Deputy Secretary of the Treasury requested new designs to replace the nickel. It wouldn’t be until 1912 when a sculptor by the name of James Earle Fraser presented a design with a Native American on the obverse and a Buffalo on the reverse. Nickel production was stopped in December 1912 until the new design could be produced. This meant the last of the Liberty Nickels were minted in 1912, or were they?

The year would bring the introduction of the Buffalo Nickel, as well as an unexpected surprise. It’s been told that a master die was created for a 1913 Liberty Nickel but was destroyed in January 1913. Somehow, five specimens of this coin were produced. One of the original owners of these five nickels was a coin dealer named Samuel Brown who had also been an employee of the Philadelphia mint. Coincidence? Later, the nickels were owned a big Texas collector, Colonel E.H.R. Green. In recent years, one nickel can be found at the Smithsonian Institution, and another at the ANA Money Museum in Colorado Springs, CO. The remaining three Liberty Nickels are owned privately, and have sold at auctions. One sold in August 2018 for $4.5 million, one of the highest paid US coins.

Besides the 1913 Liberty Nickel, there were a few key dates that would be easier to claim.

How About a Set of Liberty Nickels

Except for the 3 key dates, a Liberty Nickel set would be easy to collect. Even proof Liberty Nickels are cheap at around $250 in PF-63. You may even find one in change when you least suspect it. So, would you consider collecting Liberty Nickels?