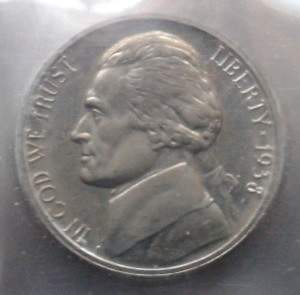 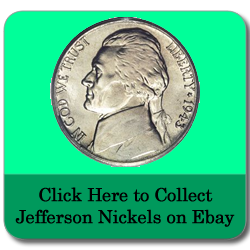 are definitely a collectors set.  You find them in change or bank rolls. You could even do a complete MS-65 (Gem Uncirculated) collection within reason. In fact, the only coin that you may pay $100 for at MS-65 is the 1939-D. And now, an intro to the Jefferson Nickel.

In January, the mint began a contest for someone to provide a new design for the nickel and as an added incentive, they offered $1,000 for the best design. The judges suggested it should be of Thomas Jefferson as it was the bicentennial of his birth, though his birth was actually 1743. The deadline to submit a design was April 15th,  and after viewing almost 400 entries, they decided on the design by Felix Schlag who had Jefferson’s profile on the obverse and him home, Monticello, on the reverse. Jefferson’s face would be changed in 2005 for the Westward Expansion Set that year and then a permanent change in 2006. 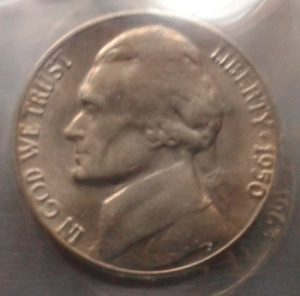 There are two key dates for the Jefferson Nickel. The 1939-D had only 3.5 million minted making it a rarity for the Jefferson Nickel, especially in higher grades. In contrast was the 1950-D which was only released in Mint Sets. Though less 1950-D nickels were minted at 2.6 million, the 1939-D is worth more in Uncirculated condition. After all, all of the 1950-D nickels were in uncirculated condition, but the 1939-D nickel was not.

When the United States entered World War II, there was a big demand for nickel. 1942 started with the normal nickel/copper/manganese composition, but by October, the nickel was replaced with 35% silver. Surprising they had 56% copper which you would have thought they would try to replace that too. 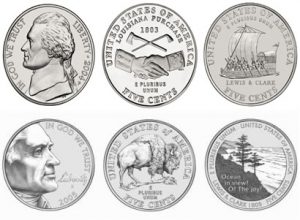 In 1803, President Jefferson purchased the Louisiana Purchase from French Emperor Napoleon Bonaparte expanding the United States beyond the Mississippi River. The next year, he would commission an expedition led by Meriwether Lewis and William Clark to map the new territory and find a route across the west. From 1804 to 1806, Lewis and Clark ventured west from near St. Louis, MO to the Oregon Coast.

The US Mint would honor the Westward Expansion in 2004 and 2005 with 4 different reverses and a different design of Jefferson in 2005.

So, what do you think?

Like I said, it’s not for investors, but easy to collect. Would you consider collecting Jefferson Nickels?

1938 – The End Of An Era
Collect A Short Set – A Short Post
Happy Victory Day!
My Coin Collecting Beginnings