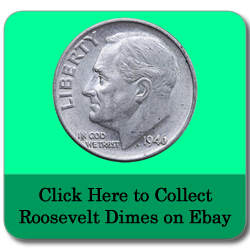 A few weeks ago I spoke about Jefferson Nickels an how simple it was to build a set of them. Today I want to speak about another simple set to put together, Roosevelt Dimes. There is one added incentive to collecting Roosevelt Dimes, silver. For almost 20 years, these dimes contained 90% silver, where Jefferson Nickels only had 4 years, 1942-1945. While silver is still around $20 an ounce, Roosevelt Dimes are still reasonably priced to buy. 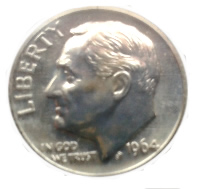 In April, 1945, World War II was coming to an end in Europe. The allies were closing in on Berlin with the Western allies coming from the west and the Soviet Union coming from the east. On April 12th, President Franklin Roosevelt passed away at the age of 63, less than on month before  the Germans surrender.

Congress would pass legislation to put Roosevelt’s face on the dime because he founded a charity organization that would become The March of Dimes. The dime would be designed by John Sinnock since he had previously designed the Presidential Medal of Roosevelt. 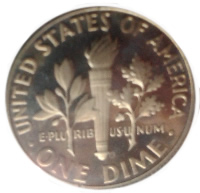 Some of the third party grading services use the detail of the torch on the reverse as an additional grading variety. PCGS has the designation Full Bands if the upper and lower bands are distinct and show no wear. NGC has the designation of Full Torch which goes beyond Full Bands by including that you can see the detail of the vertical bands and show no wear.

To mark this anniversary, the US Mint issued the 2015 March of Dimes Special Silver Set. It included a 2015-S March of Dime Silver Dollar, a 2015-P Reverse Proof Dime and a 2015-W Silver Proof Dime. 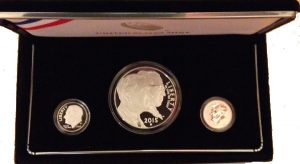 Collecting Roosevelt Dimes can be Fun

are a great set for beginners as a starter coin set. It’s been around for 70 years now. You could do the whole set, or even do a short set of just the silver ones – 1946 – 1964. Would you consider collecting Roosevelt Dimes?

Check Your Change
My Change Box