Believe it or not, a time to honor African Americans began back in 1926 while the United States was still segregated. Carter G. Woodson, a historian, declared the second week of February “Negro History Week”. He used this specific week because it was the births of Abraham Lincoln, February 12th, and Frederick Douglass, February 14th. Woodson was known as the “Father of Black History” and would be the second African American to receive a doctorate from Harvard University. His goal was to include the history of American blacks in public schools, but with segregation still occurring in this nation for almost another 30 years, not everyone would agree with this. He had support from the cities of Washington DC and Baltimore, and the states of Delaware, North Carolina and West Virginia. Unfortunately, Woodson passed away in 1950 before the end of segregation and the Civil Rights Act.

By 1969, another attempt was made, but this time honoring African Americans for the whole month of February. This was begun by the teachers and students of Kent State University who would declare Black History Month on campus for the first time in 1970. During the United States Bicentennial in 1976, President Gerald Ford recognized Black History Month and would be celebrated by the entire country ever since. Other countries would also begin recognizing this including the United Kingdom (1987), Canada (1995), and the Netherlands (2016). Though the United States and Canada celebrate it in February, the United Kingdom and the Netherlands celebrate it in October.

Now let’s see who has been honored on US coins. 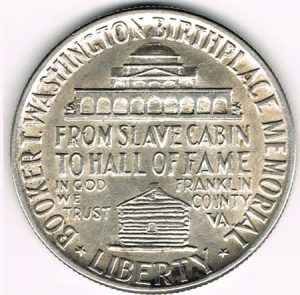 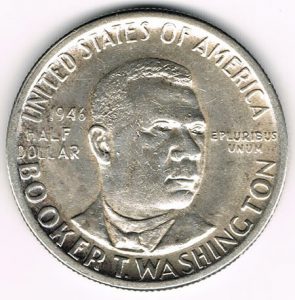 Philadelphia, Denver, and San Francisco. Booker T. Washington was born a Virginia slave in 1856. After the Civil War, his family was emancipated and they moved to West Virginia. He would have a formal education and would found what is now known as the Tuskegee University in 1881 in Alabama. He was a popular spokesman for African Americans and wrote popular books. In 1901, Washington would be the first African American to be invited to the White House by a President, Theodore Roosevelt. He remained principal of Tuskegee University until he past away in 1915. He would become the first African American honored on a stamp in 1940 and a commemorative Half Dollar in 1946. The money made from this commemorative would be used to construct memorials in honor of him. On the reverse of the commemorative are the words “From Slave Cabin to Hall of Fame” with the log cabin he was born in on the bottom and the Hall of Fame at New York University on the top. They would be sold in a 3 coin set, 1 from each mint, for $6. Between the three mints, over a million half dollars were minted in 1946. After that only a few thousand would be minted of each coin, with the exception of the 1950-S and 1951 coins. The value of individual coins start at $20 and 3 coin sets start at $60.

Where Booker T. Washington was a speaker and educator, George Washington Carver was known for 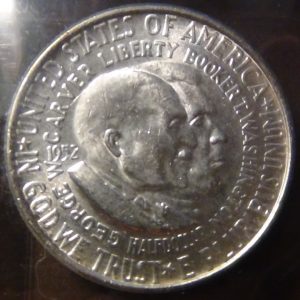 inventing and improving agriculture. Many people know Carver today for working on many uses of the peanut. What they don’t know is Carver was not the creator of peanut butter. In his 20s, Carver homesteaded a claim where he could work on agricultural experiments with fruit trees, rice, corn, etc.  In 1896, Booker T. Washington invited Carver to Tuskegee Institute to head the Agriculture Department, where he would stay until he passed away in 1943. Here he would help Southern farmers improve their crops. In 1951, Washington and Carver would be commemorated on a half dollar coin similar to Washington’s commemorative from 1946 – 1951. Both men’s busts would appear on the obverse of the coin from 1951 – 1954. This would be the last of the early US Commemoratives

until 1982. The sales of these commemoratives would be used to “oppose the spread of Communism among Negroes in the interest of national defense.” Supposedly, the remaining Booker T. Washington commemoratives that were not sold would be melted to make these new ones.

Frederick Douglass was also born a slave, but escaped at the age of 20. He would be known as an activist 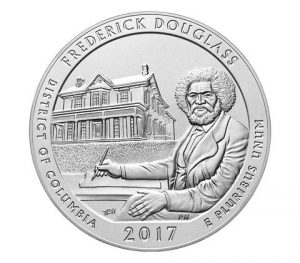 against slavery and an abolitionist attacking Jim Crow laws. He would become an adviser to President Abraham Lincoln during the Civil War. After the war, he would become a newspaper editor, president of a bank, and minister to Haiti, among other impressive duties. His home on Cedar Hill in Washington D.C. would become a National Historical Site in 1988. In 2017, this site would be put on the Washington Quarter

and 5 Ounce Silver Coins as part of the US Mint’s America the Beautiful Series depicting national sites throughout the United States.

2017 introduced American Liberty Coins showing a display of an African American woman on the obverse for the first time. During the year, the mint released a Lady Liberty

one ounce gold coin as well as, for the 225th 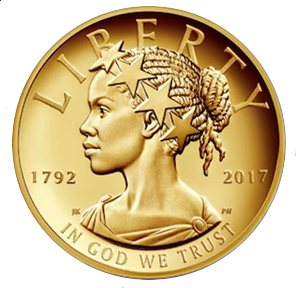 anniversary of the US Mint, four silver medals from each mint branch, Philadelphia, Denver, San Francisco and West Point. 2018 begins with a 10th ounce gold coin. I’m not sure if there will be any silver coins or medals with American Liberty of if it was a one time deal for the anniversary.

Black History Month is as important as anything else in American History. Hopefully these coins help people understand more of what African Americans have had to endure and how they were able to get away from slavery and be an important part of the success of the United States.