A while back, I wrote about going through some cent and nickel rolls to see what I would find. Going through 10 cent rolls, I did not find one Lincoln Wheat Cent, not one. The earliest date that I discovered was a 1959 Lincoln Memorial Cent. Now I know people are hoarding Wheaties, but I thought I would find at least one. However, with the 5 nickel rolls, I did get one Silver Wartime Nickels from the 1940s.

If you’re renting like I am, you have to pay to do your laundry whether it be where you live or at your local laundromat. This being the case, I buy one or two rolls of quarters a week to do such laundry. With some of the circulating 2019 Washington Quarters coming from the West Point Mint, I thought I would do a search through my laundry coin rolls. If you haven’t heard, 2 million of each quarter that comes out in 2019 will have a “W” mint mark. This means that only 10 million of the over 1 billion quarters minted in 2019 will come from West Point. You can imagine that many coin collectors will be looking in change and coin rolls for these particular quarters as they will be rare.

So, I thought I would go through the 2 rolls I currently have and see what I will find. 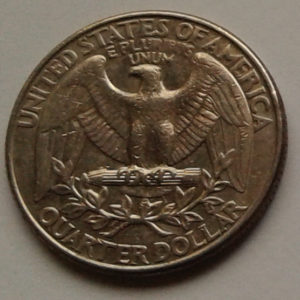 Once in a great while, I would find a silver Washington Quarter between 1932 and 1964, I didn’t expect to find one in these 2 coin rolls, and I wasn’t disappointed. I did find a 1965, the only one from the 1960s. I also found a Bicentennial Quarter which I don’t see too often:

Here is a list of what I found of the original Washington Quarters:

State Quarters helped bring back coin collecting, especially with children. The first ten years would have 5 different quarters in order of when they entered the union, from the first state Delaware to the 50th state Hawaii. 2009 would include the District of Columbia and the 5 United States territories including Puerto Rico and Guam. I still have the US map I purchased from the United States Mint and filled all 50 holes, but at this time, I’m not looking for any State Quarters.

Here is a list of what I found of the Statehood Quarters:

In an attempt to continue with the success that the Mint received with the State Quarters, they would produce America the Beautiful (or National Park) Quarters. Unfortunately, this did not happen. To try to get interest, they started adding non-proof coins produced in San Francisco in 2012, but just for collection. Surprisingly, I found 2 of these “S” mint mark quarters in previous rolls. I guess either the owners needed to use the quarters or didn’t realize that these quarters were not meant for circulation. Still, not many were interested.

Now, in 2019, West Point quarters will be released in circulation as well as Philadelphia and Denver, but only around 1% of the quarters minted will have the “W” mint mark. This has got collectors searching for them. The grading service, PCGS, has added an incentive to pay a reward for the first “W” mint mark quarter submitted to them. For example, the first Lowell National Park Quarter submitted to them paid $5,000.

So, did I find a West Point Quarter? Not this time. In fact, I didn’t even get a 2019 quarter. I was surprised to see two 2010 quarters as the mint did produce as many of them as they did with other years. One thing I have noticed is I haven’t found any Denver quarters. Even though I live closer to Philadelphia than Denver, Denver has produced more of the quarters.

Here is a list of what I found of the Statehood Quarters:

I didn’t find what I was looking for this time, but I still have to do laundry. So, I’ll continue getting quarter rolls from the bank and keep looking. This was just a small sample to show that you won’t always find what you’re looking for. Some collectors purchase $100, $250 or even $1,000 of quarter rolls searching for silver coins before 1965, or more recently the West Point Quarters. It’s just like playing the lottery. You can keep scratching tickets and not get anything, but once in a while, you’ll find a winning ticket. The plus side between the coin rolls and lottery tickets is you can return the rolls to the bank, but you can’t return lottery tickets, unless their winning ones of course.

So for all of you going through coin roll after coin roll searching for a profitable coin, keep trying. Some collectors go further and search for errors. If I had the patience, I would be a cherry picker and look at these coins more thoroughly. Maybe someday.

If you aren’t a coin roll hunter, would you consider it? Who knows, you may find something old or rare someday.