, minted between 1948 and 1963. Most of the half dollars would be from 1971 on which were clad coins, or made of copper and nickel. These are not worth much beyond face value, but the ones between 1964 and 1969 are worth something based on their silver content. I still have some of them I found back then.

As the years have past, more and more people have been going through coin rolls looking to make a profit. In fact, some will buy as much as $1,000 worth of coins. We call these people Coin Roll Hunters.

I thought I would give you a small example of a coin roll hunter. At the top of this article, you’ll see coin rolls that I purchased from the bank, 5 rolls of nickels and 10 rolls of pennies. Now, I’m going to go through each roll and give you a status of what I find.

I will search for the following: 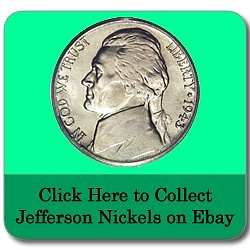 So, in 5 rolls (200 nickels), I found 10 Jefferson Nickels before 1971 and 7 Westward Journey nickels. I also found 2 Canadian nickels. There were only 2 nickels before 1960, a 1942-P Nickel composed of 35% silver and a beautiful 1959-D Nickel. No surprise there were 5 1964 Nickels, since it was the first year that both Philadelphia and Denver mints produced over one billion nickels each. This would happen again until 1999. From 1968 – 1970, Nickels were only minted in Denver and San Francisco, with 1970 being the last year that San Francisco would mint nickels in circulation. After that, San Francisco would only mint proof nickels for collectors. Surprisingly, I didn’t get any San Francisco Nickels, just a 1969-D and 2 1970-Ds. I didn’t keep any from the 1970’s and beyond because there were many made and probably wouldn’t be worth beyond face value. In fact, the only one that may be worth something would be the 1942-P Silver Nickel. At the current Silver value at around $17 per ounce, the silver content of this nickel would be $0.95. So, the nickel in this condition could be worth a little more than a dollar. It doesn’t sound like much but I only paid 5 cents for it. That’s profit, and that’s what coin roll hunters look for in the end.

I have 10 rolls (500 pennies) to go through. I was hoping to find Lincoln Wheat Cents minted between 1909 and 1958, but did not see one. The oldest Lincoln cent found was 1959, the first year of the Lincoln Memorial Cents

. Of these 500 cents, only 84 were actual copper cents, cents minted 1982 and before. The rest were zinc cents. The value of copper has been on the rise which was the reason for using zinc, although I think zinc might be rising as well. Eventually, the mint may have to stop minting the cent like Canada did in 2012. Speaking of Canada, I did find one Canadian cent, 1976.

As some of you may know, the Philadelphia mint produced 2017 cents with a “P” mint mark for the first time in the 225 years of US Coins. Just for fun, I would see how many of these I could find in these rolls. Turns out I found 105 of them, or around 1 of every 5 cents in those 10 rolls. Though this sound like a special cent, it doesn’t look like it’s going to be a rare one.

Is Coin Roll Hunting Worth It?

It depends on the time and patience you put towards it. I only bought $15 in coin rolls. So, it would be tough to find much. I was hoping to find at least one Wheat Cent

, but I did find a Silver Nickel. If I was serious, I would try to do at least $100 in rolls, but like I said earlier, there are people that will buy $1000 worth. Would you consider it?