Happy New Year to my Coin Collecting friends! I hope that 2018 was a good year for you in terms of your numismatic ventures. I will talk about mine later, but first let’s talk about what we can expect for 2019.

In 2018 we were introduced to the first gold commemorative with a pink hue symbolizing breast cancer awareness. This year will not see a first, but something special nevertheless.

On July 20, 1969, astronauts Neil Armstrong and Buzz Aldrin became the first two men to land on the moon. This was the result of a promise that was made from President John F. Kennedy to have a man on the moon by the end of decade. Later in January 2019, four different Apollo 11 50th Anniversary commemoratives will be released and for the second time in US history, they will be curved. The first curved commemoratives were the 2014 Baseball Hall of Fame coins. The four denominations that will be released are uncirculated and proof versions of the clad Half Dollar, silver Dollar, gold Five Dollar, and the 5 ounce proof silver Dollar. This set may be what coin collectors have been looking for as the Baseball Hall of Fame coins were successful.

March will see the release of the 100th anniversary of the American Legion commemoratives. Coins will be released as Clad Half Dollars, Silver Dollars and Gold Five Dollars. There will be uncirculated and proof coins released of each one.

2018 introduced the first of what will be a new set of Innovation Dollars. With the last of the Presidential Dollars released in 2016, the US Mint has released a replacement dollar set that would show a major achievement for each US state, territory and the District of Columbia. In December 2018, the first Innovation Dollar was release the first US patented signature. The signature would be of President George Washington in 1790. Between 2019 and 2032, four Innovation Dollars will be released each year. Similar to the State Quarters, the Innovation Dollars will be released in the order that states entered the union, followed be the District of Columbia and the US Territories. If you are interested in starting a new collection, this may be of interest to you. 2019 will show achievements from Delaware, Pennsylvania, New Jersey and Georgia.

Another year, another five quarters being released in the America the Beautiful collection:

This is year ten of the America the Beautiful set. Hard to believe, isn’t it. Supposedly, we have two more years to go after this one.

To go along with the Apollo 11 Commemoratives, This year’s Native American Dollar will honor Native Americans in the Space Program. On the reverse is the image of Mary Golda Ross of the Cherokee Nation. Not only was Mary the first female Native American engineer, but she was also the first female engineer to work at Lockheed where she would work from 1942 until 1973. Behind her is an Atlas-Agena rocket which she helped develop. Also, on the coin is an image of an astronaut depicting John Herrington of the Chickasaw Nation. John became the first Native American to fly in space in 2002.

2017 saw the released of the limited edition Enhanced Proof Set. 2018 introduced the first reverse proof set. What will 2019 give us? Rumor has it that the US mint will release a Youth Coin and Currency Set. 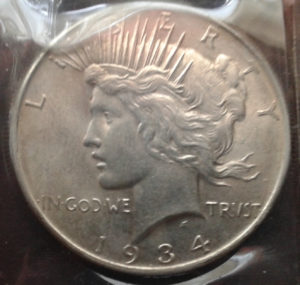 One of the things I wanted to finish in 2018 was my Peace Dollar collection. In 2001, I had 23 out of the 24 Peace Dollars when I was laid off from my job and had to stop collecting for some time. I’m glad I had the 1928, but still needed the 1934-S. In 17 years, the price for the 1934-S had doubled and realized if I didn’t get it now, I may never get it. The monthly coin club I attend has auctions at the end of every meeting. One auction had the 1934-S going for $395. It looked like an AU so I took a chance and did bid on it. Thankfully, no one else did and I got my final Peace Dollar.

What about this year’s coins? As I write this, my friend gave me the first proof American Innovation Dollar from the US Mint. Maybe I’ll consider getting the new dollar coins this year. One thing I would like to get are the Apollo 11 Commemoratives. I don’t know about the Five Dollar Gold Coin, but I may get the clad Half Dollar, silver Dollar and the Five Ounce Silver Coin. I’d love to see the Five Ounce Coin curved. Maybe I’ll also get the Native American Dollar as well as it would also go along with the Space Program. Time will tell…

So, do you have any coin resolutions this year? Maybe you’ll want to start doing an American Innovation Dollar or Presidential Silver Medal set or like me go for the Apollo 11 Commemoratives. Let me know what you would be interested in getting this year.