What do coin collectors think about when entering a new year. Some are looking for cool coins to collect while others are looking for a future investment. Let’s see what we can or can’t look forward to in 2018.

Say Goodbye to the P Mint Mark on the Penny

anniversary of US coins. This was the first time a United States cent had a “P” mint mark, and it looks like it might be the last since Philadelphia cents will once again have no mint mark in 2018. I’m sure just about everyone in the United States has seen the 2017-P Lincoln Cent by now as many were released in circulation.

, and once again there will be five different designs on the reverse of the Washington Quarter. Here is this year’s list including, finally, my home state:

There will also be the 5 Ounce Silver Coins with the same designs.

will have a new reverse design. This year’s design will be of sports legend Jim Thorpe (1887-1953). He was a member of the Sac and Fox tribe in modern day Oklahoma. In fact his tribal name, Wa-Tho-Huk meaning Bright Path, will also appear on the coin. He played in Major League Baseball with the New York Giants and six teams with the National Football League. He also won gold medals for the pentathlon and decathlon at the 1912 Summer Olympics in Stockholm, Sweden. He received many accolades including being called the greatest athlete in the first half of the 20th century and had a town in Pennsylvania named after him.

Two new Commemorative designs will be released in 2018.

First will be the World War I Centennial Silver Dollars. According to the US Mint website, some of the Silver Dollars will be released with individual Medals from each branch of the military, Army, Navy, Marines, Air Force and Coast Guard.

The second design will commemorate Breast Cancer Awareness which will include a clad Half Dollar, Silver Dollar and $5 Gold Piece. 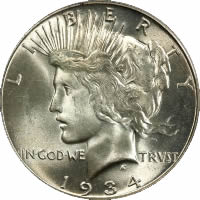 2017 saw me completing my NGC Wartime Nickel Set which includes 11 MS-67 Silver Nickels between 1942 and 1945 and the 1942-P Silver Nickel Proof. Now that I have that done, I can work on getting the last Peace Dollar

. I have 23 out of 24 Peace Dollars and hopefully this will be the year I complete it. After that, I can either go back to working on the short set of 1941 to 1947 Walking Liberty Half Dollars

or collect some more 5 ounce America the Beautiful quarters.

If you collect coins, or are considering starting, what would be your Coin Resolutions for 2018?