When I started collecting coins back in the 1970’s, you had to do your own grading. Sometimes, when you tried to sell a coin, the person you sell it too might think the condition may be lower than you think. Sometimes, going down one grade could be a significant difference in price.

I’ll give you an example from my 2016 Red Book. I have been working on a Peace Dollar

collection and the only one that I need is the 1934-S. A coin dealer shows me one he has graded in MS-60 and is offering $1,000 for it. That’s 50% less than what it shows in the Red Book. I say okay and now I’ve completed my collection. A few years later, I decide to sell my collection and send it to a coin shop to get it appraised. The owner of the shop looks at the 1934-S and says there a little wear on the coin and will buy it as an AU-50 which is a lower grade than an MS-60. Of course, I’m not happy about this because instead of getting twice what I paid for an MS-60, I would be getting half for an AU-50 because it’s only worth $500. Now, when grading between AU-50 and MS-60, there is not a big difference to the naked eye. Let me tell you, grading is not easy.

Introduction of third party grading began back in 1972, which would grade the coins for you, but encapsulation, or slabs wouldn’t begin until the mid 1980s. The age of certification had begun. The top four certification companies are PCGS (Professional Coin Grading Service), NGC (Numismatic Guaranty Corporation), ANACS (American Numismatic Association Certification Service) and ICG (Independent Coin Graders).

would be the second company to grade and certify coins, and the first to encapsulate the coins they graded.  Their mission was to define the grading standard and grade coins as accurate as possible. PCGS holders or slabs are a clear plastic with a hologram on the back to prevent from being counterfeits. They also check for varieties like Full Steps on the Jefferson Nickel and Full Bell Lines on the Franklin Half Dollar.  PCGS is not only the most popular certification service, but the most reliable among coin dealers. 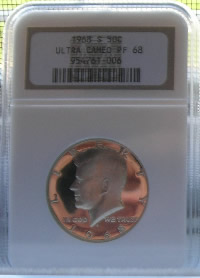 started shortly after PCGS in 1987. It’s the official grading service of the American Numismatic Association (ANA) since 1995 and the Professional Numismatics Guild (PNG) since 2004. Dealers consider them second most reliable next to PCGS. Their holders have been Edgeview® holders since 2008. According to the NGC website “The EdgeView® holder includes a micro-printed label with a UV watermark and an advanced-technology hologram fused directly onto the back of the holder — that is virtually impossible to reproduce.” NGC also does varieties and errors like PCGS but instead of Deep Cameo on Proof coins, NGC uses Ultra Cameo.

ANACS is the oldest grading service being around since 1972. They were created by the American Numismatic Association to help collectors grade coins and fend against counterfeit coins. Their located in Washington DC, close to the Smithsonian Institution which has their own Numismatic collection, and the Treasury Department. Initially, they would give photo certificates with both sides of the coin, grading, and any comments of the coin. Seeing what the other grading services were doing, they started using holders in 1989. In 1990, the ANA sold ANACS to the publishers of Coin World Magazine. Some dealers think their grading is looser than PCGS and NGC making them less respectable.

ICG started grading coins in 1998. Their holders are curved on the left and right sides making it different from the other companies. Dealers consider their grading the loosest of the four companies listed here. A perfect proof coin with ICG may be less than perfect with PCGS.

As much as their have tried to keep their slabs from being counterfeit, there are people out there that have made fake holders. Of course the companies are always trying to prevent counterfeit slabs. For instance NGC has a certification tool on their website to determine if the slab you have is legitimate. Just like coins, buy from authentic dealers and stay away from Chinese coin dealers on Ebay and other online auctions because that is where most of the counterfeits have come from.

When it comes to grading, slabs are the best deal

If you want them to grade and slab your coins, you’ll have to pay a fee and possibly have to subscribe to their service. It’s easier just to buy them already graded. Hope this helps you understand certified coins a little more.