I vaguely remember the moment it happened as I was a very young child in 1969, but I remember hearing a lot about it. The year saw many young Americans fighting a war in Asia, a tremendous musical festival in upstate New York, and the last album released by the Beatles before they broke up. As big as these events were, one other would surpass all of these. On July 20, 1969,, the first man, an American astronaut, stepped foot on the moon.

While the United States and the Soviet Union were allies during World War II, that alliance would dwindle the first few years after the end of the war. By the 1950s, the two nations would end up in a Cold War which would last for the next 40 years. As there were no new lands to conquer on Earth, both nations looked up to the sky for conquest.

The Soviets struck first by launching the satellite Sputnik 1 on October 4, 1957. For the next decade, both the Soviet Union and United States would launch satellites and rockets into space with animal and human passengers.

On September 12, 1961, President John F. Kennedy gave a speech at Rice University in Houston, TX which included the following: 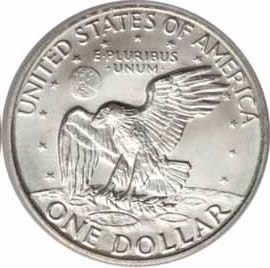 Kennedy was also hoping to collaborate the moon landing with the Soviets, but Premiere Nikita Khrushchev would not accept. The race to the moon was on. The Soviets struck first on February 3, 1966, when their unmanned Luna 9 spacecraft made a soft landing on the moon. However, in December 1968, three American astronauts would be the first to orbit the moon. Time was running out to get a man on the moon before the end of the decade.

On July 16, 1969,, Apollo 11 launched with Commander Neil Armstrong, Lunar Module Pilot Edwin “Buzz” Aldrin Jr. and Command Module Pilot Michael Collins. It would enter lunar orbit on July 19th, and on July 20th, the Lunar Module Eagle landed on the Moon with Armstrong and Aldrin inside. Armstrong would be the first man to set foot on the Moon with the immortal words “one small step for man, one giant leap for mankind”. Though President Kennedy would not live to see it, his promise was fulfilled.

Apollo 11’s insignia would inspire the reverse of the Eisenhower Dollar in 1971.

Of Course There Are Skeptics

I remember seeing a movie in the theater back in the 1970s called Capricorn One. The movie depicted the first manned mission to Mars, but it was found out that the mission was fake. There are people who do not believe that the Apollo 11 Mission happened. It was just a hoax to win the Space Race. Some skeptics have gone as far as saying that Stanley Kubrick, who directed 2001: A Space Odyssey two years before the moon landing, was accused of providing footage to show the landing. As the new commemoratives are released, there are still people who can’t believe that it happened. 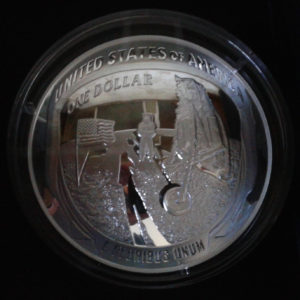 Whether you believe it happened or not, the US Mint released coins on January 24, 2019, to commemorate the Apollo 11 Landing. As with other recent commemoratives, there will be a clad Half Dollar, a silver Dollar and a gold $5 coin in both Mint State and Proof conditions. This will be the first commemorative to appear on a five ounce silver coin.

Here are where each one will be minted: 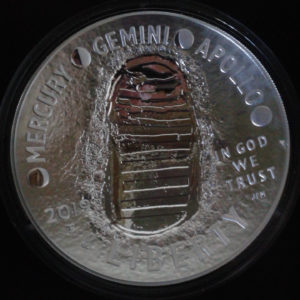 The obverse of the coins will have the words “Mercury”, “Gemini”, and Apollo, separated by each phase of the moon. Mercury was the first American program to include manned space mission between 1958 and 1963. Gemini was the second American program from 1961 to 1966,. Apollo would be the third program. The obverse also depicts a footprint on the lunar surface.

The reverse depicts the photograph taken on July 20, 1969, looking through the visor of Buzz Aldrin’s helmet. Through the visor reflection, you see Neil Armstrong with the American flag and the Lunar Lander

To make these coins even more interesting, the Mint made them curved, just like the Baseball Hall of Fame commemoratives back in 2014.

Some money made on these commemoratives will be given to the Smithsonian National Air and Space Museum’s Destination Moon exhibit, the Astronaut Memorial Foundation, and the Astronaut Scholarship Foundation.

Here’s Your Chance To Own A Special Commemorative

Not only can you own a piece of American history, you can own the second commemorative that’s curved. Would you consider obtaining one of the Apollo 11 commemoratives?