With the 50th anniversary of the Apollo 11 Landing coming in 2019, the US Mint is having a contest to design a commemorative for this occasion. This commemorative will be similar to the Baseball Hall of Fame commemoratives where there will be a clad half dollar, silver dollar and gold $5 minted and will be concave. This will be a great opportunity for artists 18 or older to have their design on a US Commemorative

How the Moon Landing Came About

With the Cold War between the United States and the Soviet Union in full force in the 1950s, the two countries were competing to be the first in space. The Soviet Union would win the first round by sending the satellite Sputnik into space in 1957.

On April 12, 1961, Yuri Gagarin would become the first man in space. Score two to the Soviets.

Hearing this, President John F. Kennedy would address Congress on May 25, 1961 with the mission to have an American be the first man on the moon. This would introduce the Apollo program. In 1962, he gave a speech at Rice University Stadium in Houston, TX. Included in his speech, President Kennedy said “We choose to go to the moon!…We choose to go to the Moon in this decade and do the other things, not because they are easy, but because they are hard; because that goal will serve to organize and measure the best of our energies and skills, because that challenge is one that we are willing to accept, one we are unwilling to postpone, and one we intend to win”.

After President Kennedy was assassinated on November 22, 1963, it became more important for the US to be first to the moon and get him there before the end of the decade. It was close, but on July 20, 1969,  Apollo 11, landed on the moon and Astronaut Neil Armstrong stepped on the surface. The Apollo program continued to have missions up to Apollo 17 in December, 1972. 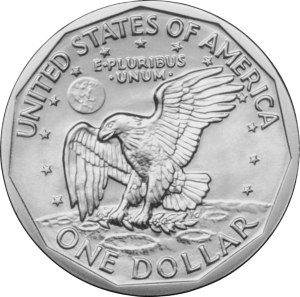 In 1969, the US Mint was looking to bring back the dollar coin. The last circulating dollar was minted in 1935 and there was an attempt to reintroduce the Peace Dollar in 1964, which ended up not happening. With silver on the rise, it was determined the dollar would be clad (copper and nickel) in circulation, but would mint dollars with some silver for collectors. With former President Dwight D. Eisenhower passing away on March 28, 1969, it was decided the new dollar would display his face on the obverse. Later that year, it was decided to use the Apollo 11 emblem for the reverse. It displays an Eagle landing on the moon surface with the Earth in the distance. The emblem would appear on the reverse of the Eisenhower Dollar

The Susan B. Anthony Dollar would continue to include the emblem on the reverse between 1979 and 1981 and return in 1999.

How Will the Next Apollo 11 Commemorative Appear

Have any ideas? Go the US Mint website, usmint.gov, and apply before June 29, 2017 and see the official rules. If you are accepted, you will have until September 8, 2017 to submit a design. So start now! If you win, you can show your friends that your design made it on a US Commemorative

2 thoughts on “Another Mint Contest”