Skip to content
Home » My Collection » Am I a Collector or an Investor?

I get asked this question a lot. Though I do both, I think I’m more of a collector. Don’t get me wrong, I’d like to make some money for my collection, but I have more fun collecting coins. Here are a couple of examples of my collector side:

When the US Mint started minting Washington Quarters

with a different state design on the reverse in 1999, they put together an album of a United States map with a spot to put a quarter for each state. So, every time a new quarter came out, it would be put on the map. With 5 different state quarters released each year, the final quarters didn’t come out until 2008. I’ve got to admit one thing though, I was looking at this and noticed I forgot to add the Hawaii coin. Fortunately, I found one and the map is complete. The point of this is I don’t expect these quarters to be worth more than…a quarter. This just gave me something to collect. 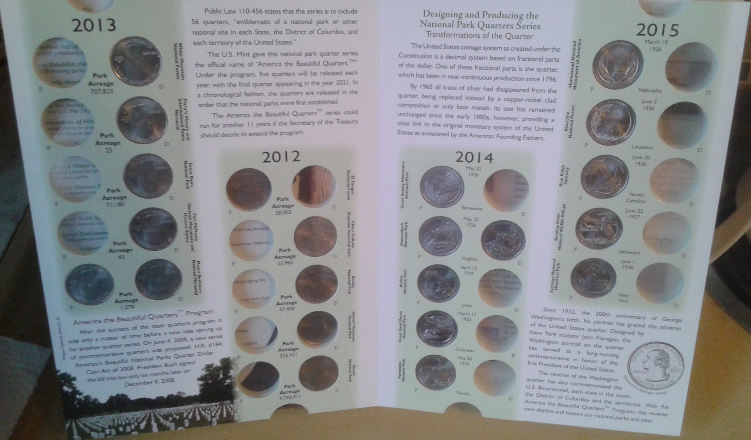 Last year, I went to the New Hampshire Coin Show in Manchester, NH. While there, I purchased a Walking Liberty Half Dollar

in MS-64. As I walked to the different tables, I found one that had coin albums. I ended up buying this one above that has holes for every Philadelphia and Denver coin for each National Park between 2010 and 2021. Unlike the State Quarter Map, I was a few years behind. I’ve got many of the Philadelphia Quarters living on the east coast. Only have a few of the Denver coins. I got a couple of San Francisco quarters, but they started those in 2012 which was after this album was made. Darn!

If You’re Going to Collect, Collect

There’s nothing wrong collecting something simple. It gives you a sense of accomplishment while you work on other sets. I’m working on Peace Dollar

, but these take time to complete. In the meantime, I can look in my pocket and see if I can find another National Park Quarter that I need.

How about you? Is there a simple collection out there for you? If you’re not interested in quarters, how about Sacagawea or Presidential Dollars? If you want a longer set, you could do Lincoln Memorial Cents

One more thing – If you find a National Park Quarter with a ‘D’ mint mark and don’t need it for laundry, let me know.

4 thoughts on “Am I a Collector or an Investor?”