When the Civil War ended in 1865, Confederate paper money was considered worthless. What about Confederate coins? On November 1, 2017, Heritage Auctions held Part IX of the Eric P. Newman collection auction. Included in this collection was a Confederate 1861 Liberty Seated Half Dollar graded Proof-40 by NGC (National Guaranty Corporation). Supposedly, Mr. Newman purchased this coin 80 years ago for $4,000, but on November 1st, it sold for $960,000. This coin is 1 of only 4 known half dollars minted at the New Orleans in April, 1861, when it was controlled by the new Confederacy. This makes it one of the rarest coins in United States history. Even the 1913 Liberty Nickel has more found with a total of 5.

Dahlonega would produce a small amount of gold dollars

Charlotte would mint 6,879 half eagles before the Confederacy decided to use the building as a hospital and military office.

While Louisiana was still part of the Union in January, 1861, the New Orleans mint was producing silver 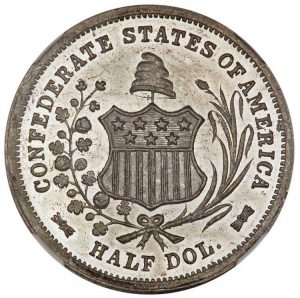 half dollars and double eagles ($20 gold coins). The Confederacy took over the mint in March and kept the mint workers which would produce 962,633 of the 2,532,633 half dollars there. The Confederacy would attempt to produce their own half dollars with the same Liberty Seated obverse, but with a new reverse with a shield and “Confederate States of America” in place of “United States of America”. The number of these altered half dollars is unknown, but 4 are known to exist. The mint office would close on May 31, and the building would be used by Confederate troops.  In 1862, control of New Orleans would return to the Union. By April, the American flag was placed on the roof of the mint building, but a Southern sympathizer, William Mumford, would make his way to the roof and tear down the flag. He would be executed in June and the mint would remain closed until 1879, when it was the alternative reverse coins were discovered.

Before the war officially started, the Confederate Treasury asked Robert Lovett Jr., an engraver from 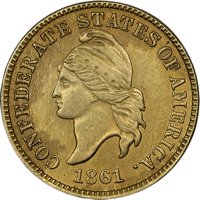 Philadelphia to create a one cent coin for them. By the time Lovett created the dies and produced 12 copper nickel cents, the war had started and he hid them to avoid getting arrested. These cents were not known until 1871 when Lovett was paying a bar tab and accidentally paid with one of the Confederate cents. Now known, Lovett would sell the dies and cents to a collector, Captain John Haseltime.  In 1874, Haseltime would end up selling the original cents, and with the dies would produces restrikes: 7 gold coins

Besides the cent and half dollars, there are not any other known coins made specifically for the Confederacy, and they never received the cents. There are fake denominations out there like 1/4 cent. All three mints were closed within a year of the beginning of the Civil War, and only one would reopen years after the war ended.