Hey there! My name is Kevin and I’ve been collecting coins for over 35 years. 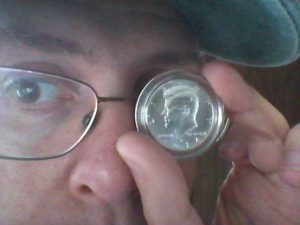 At the age of 11, I started off with the popular blue Whitman coin folders. I had the first two Lincoln folders as well as the first Jefferson Nickels and Roosevelt Dimes folders. My mom had a glass piggy bank full of wheat pennies which helped me fill a lot of slots. None of the rare ones like the 1909-S, 1909-S VDB or 1914-D, but did find a 1909-P VDB and 1915-D and S. She also had a bank filled of Jeffersons which is a lot easier to fill than the Lincolns.

Two of my closest friends were also coin collectors which made it more fun. We would go to the local coin shop to try to fill holes that we couldn’t normally find.

Why did I do this blog?

I wanted to do this blog to make people realize that coin collecting doesn’t have to be boring. It’s what you make it. You don’t have to just collect one coin. Unless you have a lot of money, you won’t be building a complete Lincoln Cent or Morgan Dollar collection. Start with what interests you. Maybe you like the Statehood Quarters or you’d consider doing a Franklin Half Dollar set (only 35 coins to complete).

In any event, I hope I can help you with your collection and I hope to learn more as I do this. I’m also building another coin website which I will include this blog upon completion.

So enjoy the blog and let’s start collecting!