Skip to content
Home » US Mints » A Visit to the Mint

April 2nd was the 225th Anniversary of the first US Coinage Act which included establishing a US Mint. On April 5th, I visited the US Mint in Philadelphia for the first time. Philadelphia is the 2nd closest US Mint to me. West Point is actually closer to home, but I’m not sure if they allow tours there. 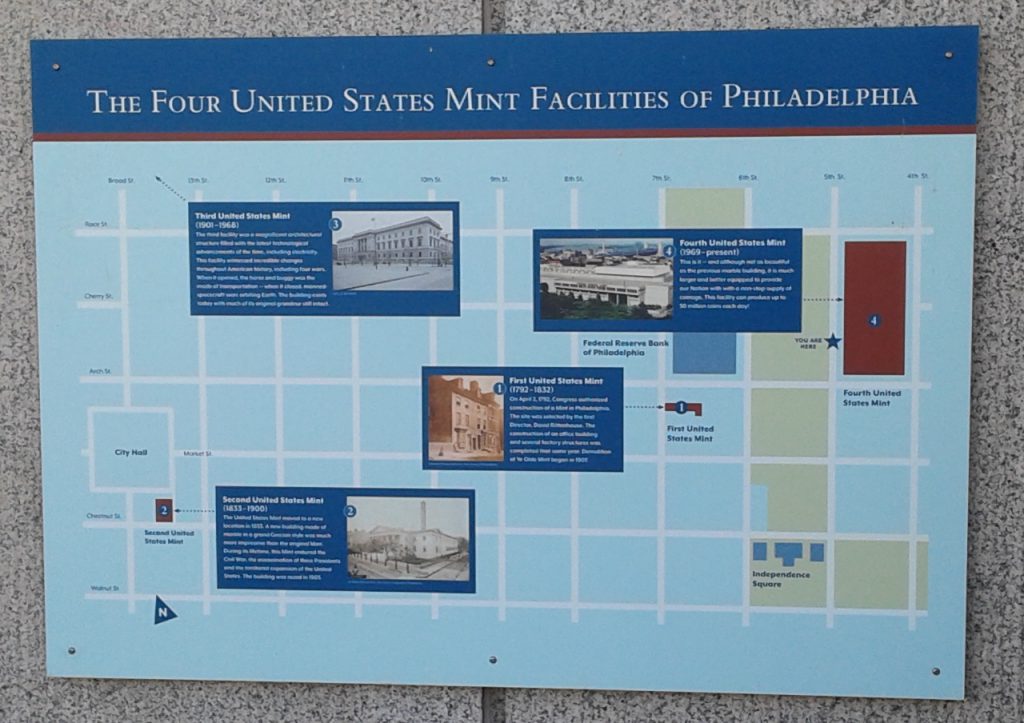 Starting off in the Lobby, or 1st Floor, you’ll see some mosaics made of Tiffany glass. They were originally made for the Third Location of the US Mint, but was moved here to the Fourth Location. According to the handbook, it depicts “ancient Roman coin making”. There are also displays of coins made at the mint including silver, gold and bullion. You might find other pamphlets there beside the handbook. When I went, they had pamphlets on the 2017 Commemoratives

including Lions Club and Boys Town.

Next, you take the escalator up the 2nd Floor or Mezzanine. This floor is devoted to the history of the US Mint. There are displays from each of the four mints that existed in Philadelphia including the first mint press. There is also a theater known as the David Rittenhouse Theater. You can see a 6 minute film on establishing a US Mint and creating coinage for the new country. David Rittenhouse, who was a scientist, was appointed by President George Washington to become the first Director of the US Mint. He had a lot of involvement of establishing the first Mint which was not too far from the current building. The 2nd floor has some fun things to do. This include “History in Your Pocket”. The idea is to take a coin out of your pocket and look at the timeline for the year and see what happened at that time. There was also a video where there are 30 million coins and you have to get the people to put all the money in the bank. You would need to keep them away from obstacles like a storm grate where the coins could fall and a couch where the coins could fall under the cushions. I didn’t fully understand how to do it and when time ran out, I only had 9 million coins left. Then, I watched some kids try it and they saved 20 million coins. At that point, I headed up the next escalator.

The 3rd floor is the Gallery and Factory floor. There are windows so you can look down at the factory floor and there are signs showing the different machinery. As you walk along, you’ll see a gallery of each process of creating a coin. Each process is color coded and displays in the following order:

There are also some interactive displays where you can get a better understanding of the process. I remember there was one display where you could design your own coin. I was wishing we could actually design a Washington Quarter

, similar to a Statehood Quarter

. Unfortunately, the finished quarter gets displayed on a screen with other people’s designs. Still cool to do.

When I was there, I saw Lincoln Cents being created down the factory floor. There was also a couple of windows showing medals.

Go back to the lobby and you can enter the Gift shop. There are coin sets, medals, bullion coins, mint sets and proof sets you could buy. I bought a T-Shirt with a Lincoln Cent

design on it and a coin which I’ll talk about in my next post.

I asked the cashier if there was anything there for the 225th anniversary. He said beside the 2017 penny with the P mint mark, there were dollar coins, I think American Eagle Silver Dollars, with a mark for the anniversary, but they sold out in a half hour the day before I got there. He also said the Gold Liberty coins with the African American woman on the obverse would be released in the next day or so. At one ounce of gold, I don’t expect to be getting one of those anytime soon.

Other Places to Visit Nearby

After you have had your coin fixation, you can visit other Historical Buildings nearby. Across the street is the National Constitution Center. On the picture above, you can see Independence Hall in the center. To the right side is the Visitor Center I had mentioned earlier with a parking lot underneath. I think the Liberty Bell is further down on the right, but didn’t get a chance to go down there.

Old City Philadelphia is a nice place to visit for a day. Like any other big city in the United States, getting in and out is not always easy with all the traffic going through. I got into Philadelphia around 10;30am and traffic wasn’t too bad. Getting out was another story. I headed back on the highway around 1pm and it was stop and go almost to the airport south of the city. All I can say is plan accordingly and enjoy your stay.

4 thoughts on “A Visit to the Mint”