A while back, I spoke about building a Wartime Nickel Set where every nickel was graded Mint State 67. Back in the late 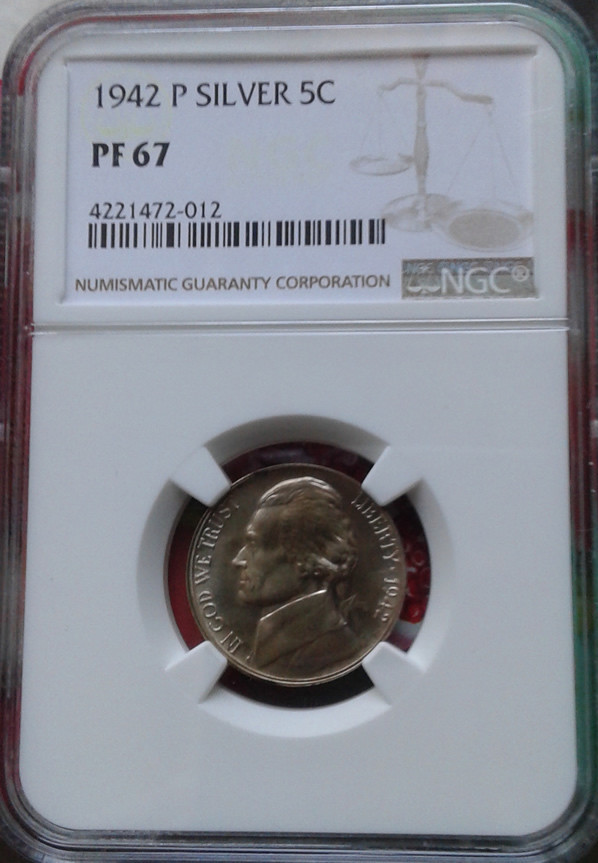 1990s, I started purchasing them between EBay and Coin Shows. Each of them was graded and slabbed by NGC. I’ll explain about slabbed coins in a bit. There are a total of 11 Wartime Nickels between 1942 and 1945 and by the time I was laid off from my job in 2001, I had 9 of them. I would put them away in an NGC container for 15 years.

By 2016, I started looking at them again and went on a quest to get the final 2 nickels. The first one, the 1942-S, was easy to find on EBay, and reasonably priced. The second one, the 1945-P, was tougher than NGC only grading between 400 and 500 in Mint State 67. At the time, some had it valued at $500. That’s more than I paid for the other 10 in total. Fortunately, I was able to find one from a reliable dealer for half the price.

I now have all 11, but my friend suggested adding the 1942-P Silver Jefferson Nickel to make it complete. I would find this at a coin show one month after finding the 1945-P.

By the end of 2016, I had 12 Wartime Nickels, but how would I house them? Should I keep them in the NGC box? I could, but I wanted to put them together so I could show them like a coin album. So, I would build my own album, but before I talk about that, let talk about slabbed coins.

What Is A Slabbed Coin?

A slabbed coin is a coin graded by a third party and encapsulated in plastic to protect it. Besides being able to see the obverse and reverse, the slab will contain the date, mint mark, grade, and an id number given by the company that certified it. More recently, some have included an image, what collection it came from, and even a signature.

Numismatic Guaranty Corporation (NGC). I currently have over 100 slabbed coins from NGC, though I haven’t sent any coins to be certified yet. I think it costs between $15 and $30 to slab a coin. So, if you want to certify your coins, make sure its worth it.

As nice as it is to have slabbed coins, you need to be careful. There have been counterfeit slabbed coins that have come from China and some of them look real close to the ones from one of the third party services. The best thing to do is to purchase slabbed coins from a reliable coin dealer. The only problem with purchasing from a dealer is some may overprice you. Do your homework and find out what the coin’s value might be. NGC’s website, ngccoin.com, has a price guide to assist you. I’m sure PCGS’s website has something similar.

Now, let’s get back to my 12 slabbed Wartime Nickels. NGC boxes hold 20 coins which are convenient if you are planning on holding or selling them. I wanted to create an album so I could show them easily without having to continuously take them out of the box, then putting them back in there. So, I found a way.

First, I bought a binder that you can get at Walmart or an office supply store. Then I purchased 2 slab pages to hold the slabs. Each page can hold 9 regular sized slabs. I’m not sure if there are any out there for the slabs with multiple coins yet. The first page has the Proof-67 1942-P as well as the 9 Mint State 67 silver nickels from 1942 to 1944. The second page contains the three nickels from 1945. I wish I had kept my 3 1943 steel pennies because I could have called it my World War II Album. Nevertheless, I’m happy with my slab album. The only thing I might want to do is create a cover like Whitman and Dansco Albums. Someday…

As I was writing this, I was looking up slab albums and found some out there. I’m not sure how long they have been out there, but it looks like it cost me half the price to do my own.

Would You Consider Building A Slab Album?

My next Slab Album is a short set of Walking Liberty Half Dollars from 1941 to 1947. There’s 20 in total which means I would need 3 pages. When I collect all 20, should I do my own slab album again, or get an actual slab album? What would you build a Slab Album of?