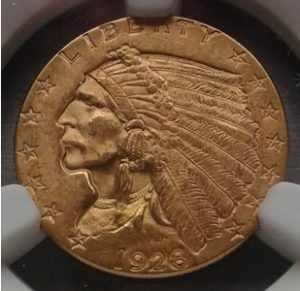 For some coin collectors, the ultimate coin has been a 1909-S VDB Lincoln Cent

or a 1932-D Washington Quarter

. For others, it has been a particular coin, like a Trade Dollar

, Seated Liberty Dollar or even a Bust Half. For my friend and I, it was something else.

Around 25 years ago, my friend Bob and I would talk about what we would like to someday get in terms of coins. One of those coins was a Indian Quarter Eagle. This was a gold coin that was minted between 1908 and 1929 with a denomination of $2.50. We wanted to get a circulated gold coin and the Indian Quarter Eagle seemed to be one of the earlier ones. Through the years we spoke about it, but had never got one, until March 26, 2017. We went to the annual Willimantic Coin Show in eastern Connecticut. We walked around all of the different dealer tables. Bob found another coin he was looking for, but we only found a few non-slab Indians in Almost Uncirculated or low Mint State conditions. In the last row of tables was a dealer who goes to the same coin club as us. Bob noticed a couple of Indians there, but also saw a 1907 Liberty Quarter Eagle. As he was 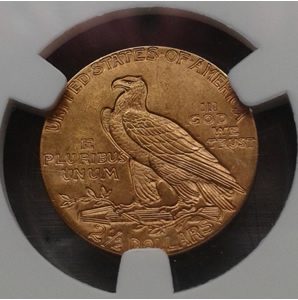 thinking of building a 1907 coin set, he bought the Liberty Quarter Eagle. Then he called me over to look at the two Indians. He hadn’t told me yet that he had bought the Liberty Quarter Eagle. So, I thought he was going to get one and I would get the other. I noticed the 1928 and said I would take that one. Unfortunately, I only had 2/3 of the amount the dealer gave us. My friend was kind enough to pay the other 1/3 as a birthday present and I finally had my own Indian Quarter Eagle.

were used in circulation from the 1790’s to 1933. The gold standard ended with the Presidency of Franklin Delano Roosevelt. Getting one of these gold coins was a dream come true. I have been looking at this coin which is about the size of a dime a number of times today. I still cannot believe I have it. So, what will I get next? I don’t know…I’m still looking at this coin.

Is there a coin that may currently be out of your reach, but hope to get someday? Maybe it’s a rare coin in a set you’re working on at the moment. Maybe it’s a coin from early US history, a colonial coin, or even a foreign coin. I’d like to hear what you’re looking for.

6 thoughts on “A Dream Come True”