A couple of weeks ago, my mom was going through a catalog and saw something she thought I would like. If you know me, I’m a Boston Red Sox fan, and 2018 was one of their best years including winning their 4 World Series in 15 years. Anyway, my mom saw a set of a dozen American Eagle Silver Dollars with a different Red Sox player painted on each. She thought the set would cost between $100 and $200, but when she looked closely, she found that they were selling each coin for $99 plus $6 tax. Now if she decided to buy this set, it would cost her a total of $1,260. That doesn’t include shipping but does include a case to put them in. Nice of them, eh?

Now, American Eagle Dollars are currently worth between $20 and $25. So 12 of them could be worth around $300. Why would you purchase them for 4 times what their worth. As a Red Sox fan, they would look nice to have and display, but as a Coin Collector, I look at them differently. I’m not a big fan of painted coins. The only ones I have were given to me as gifts.

There are coins that came out in 2018 that I would prefer more than this set.

2018 saw the Mint, Proof and Silver Proof sets, like years past, but there were also special sets that came out. 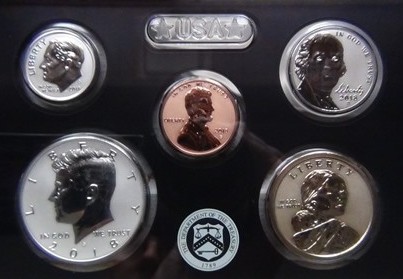 One that I did purchase was the Silver Reverse Proof Set. This was the first year that the US Mint did this and the first time we would see a reverse proof Lincoln Cent and Jefferson Nickel. Included were the five America the Beautiful Quarters that came out. The set was released to honor the 50th anniversary of the San Francisco mint producing proof coins. They did sell out at the mint earlier in the year. It would be nice if they did this each year like the regular proof sets.

There was also a Limited Edition Silver Proof Set from San Francisco. It includes a Roosevelt Dime, all 5 America the Beautiful Quarters, a Kennedy Half Dollar and an American Eagle Dollar. The US Mint only plans on releasing 50,000 of these sets. 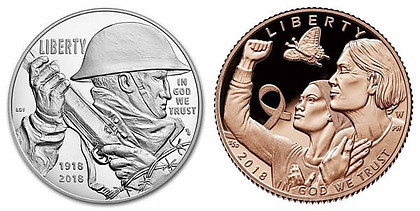 Awareness coins. There was a first this year for commemoratives.

Some World War I Commemorative Silver Dollars were accompanied by a medal commemorating one of 5 of America’s armed forces: Army, Navy, Marines, Air Force, or Coast Guard.

Here’s a second attempt to do a Presidential collection. From 2007 to 2016, the US Mint released the Presidential Dollar in hopes of them being as successful as the Statehood Quarters. Unfortunately, they didn’t and after the first few years, the dollars were no longer released in production. 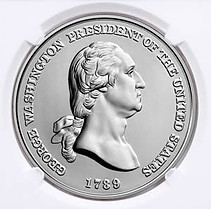 2018 saw the release of the first two Presidential Silver Medals, George Washington and John Adams. Starting in 2019, there will be four silver medals released a year. I believe this is the first silver medal collection that the US Mint has released. The medals are one troy ounce with 99.99% silver and 1.5 inches in diameter. The obverse will have the name of the President and the first year they served. The reverse has the words “Peace and Friendship” with two hands clasped together and a tomahawk and peace pipe above.

One nice thing about this set is you can start it now from the beginning. Plus they will be in uncirculating condition and they are silver. 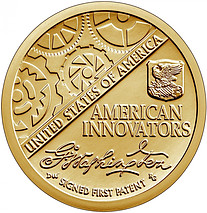 Just like the Presidential Silver Medals, the Innovation Dollar will also begin in 2018. I believe they will be released around December 14th. The first dollar will have the Statue of Liberty on the obverse and George Washington’s signature on the reverse. This signature was the first US patent back in 1790. Starting in 2019, four different dollars will be released each year. This set should last until 2032 as they will release one coin from each state, US territory and the District of Columbia. Just like the Statehood Quarters, the new dollars will be released in order that the states ratified the Constitution, then the District of Columbia and the US territories.

Once again, here is another set you can begin now. 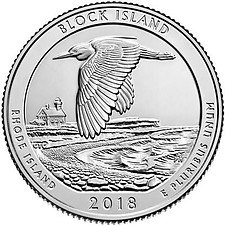 Wishing Everyone a Very Merry Christmas!