Well, here we go again. I was wondering if they would do this again, and it sounds like they will. In 2019, the West Point Mint released circulated coins for the first time with the “W” mint mark. They did mint Lincoln Cents in the 1970s and 1980s, but there is no way to distinguish them with Philadelphia cents since neither included a mint mark. West Point minted 2 million of each quarter released for a total of 10 million for 2019. With many people looking for these rare West Point quarters, the mint decided to do it again for 2020. For once, they did something right putting them out in circulation to give everyone a chance to find them, and maybe get more coin collectors out of it. It gives people a chance for people to own a modern rarity as there will only 10 million West Point quarters mixed with over a billion from Philadelphia and Denver. Also, there are the billions and billions of quarters before 2019 that we will have to deal with looking for the “W” mint mark quarter. 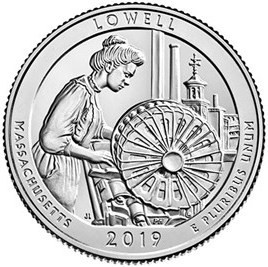 I haven’t found values for these West Point Quarters yet. So, I thought I would check out EBay and see what other people were selling them for.

Lowell National Park was the first quarter released. If you look at ones that hadn’t been graded or slabbed, they seem to be asking between $10 and $15. It looks like hundreds have been sold. If you prefer slabbed coins, I found a Mint State 65 for $25 and a Mint State 66 for $30 and up. Now if you are looking for a beautiful Mint State 67 quarter, good luck paying under $150.

Whatever the price may be, you’ll make a great profit, especially if you found one in change!

It’s hard to believe we’re finally coming to the end of the America the Beautiful Quarter Set. It started back in 2010 and the last one comes out in 2021. Here are the 2020 quarters that will include some from West Point:

In 2019, the grading service PCGS offered what they called “The PCGS 2019 Quarter Quest”. They offered a reward to the first person that would send them each of the five West Point quarters. For the first Lowell National Quarter sent to them, PCGS rewarded the owner with $5,000. They rewarded $2,000 for each of the four remaining quarters. I wonder if PCGS will do this again for 2020? It would be another incentive to find the “W” mint mark quarter quickly.

Are You Going To Be Looking For 2020 West Point Quarters?

As I write this, West Point has begun minting the 2020-W quarters for circulation. So far, I haven’t seen a 2019 West Point quarter yet in change or all the quarter rolls I got for laundry. I have heard from others saying they have found one or more, so I’m not giving up. Who knows? I did find an “S” mint mark in one of the quarter rolls I got last year which surprised me, but alas no “W”. Maybe I’ll find one of the new 2020 quarters. This reminds me of Willy Wonka and the Chocolate Factory and all the people searching for one of five golden tickets. Will you be checking your change like me for that rare West Point quarter?

Here’s one way to consider the rarity of the “W” mint mark quarters. The mintages for the 2019 Lowell National Park quarters are as follows:

That makes a total of 350,000,000 minted for that particular quarter. That means that only 0.6% of the Lowell quarters will have a “W” mint mark. Not ever 1% of the total! How’s that for a modern rarity, and in circulation. That should convince anyone to look for them.

Who knows what they’ll do with the quarter in 2021. The fifty-sixth and final America the Beautiful will be released and I haven’t seen what the mint will do after that. Will we see a “W” on any of these? Guess that we’ll have to wait and see. I myself hope they do, and really hope I find one if they do.