2018 marks the ninth year of the America the Beautiful Quarters

collection. So far, there have been forty different designs from forty different locations throughout the United States and its territories. They are being released in the order that they became national sites. Though these were originally called National Park Quarters

, I believe there are only 27 states that actually have a National Park. So, to accommodate each state and US territory, the criteria was extended to sites under the US Forest Service and the US Fish and Wildlife Service, and the quarters are now known as the America the Beautiful Quarters

As with previous years, there will be five different quarter designs throughout 2018 and the designs will also appear on the Five Ounce Silver Bullion Coins.

Looks like for this year, they are commemorating sites from three Midwestern states, Michigan, Wisconsin and Minnesota, down south in Georgia, and up to New England and my home state, Rhode Island. Let’s get a little more information of each of these sites: 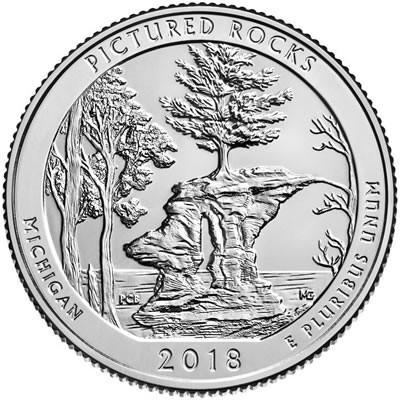 First quarter design of 2018 comes from the state of Michigan. Pictured Rocks National Lakeshore is located in the Upper Peninsula, or “UP” for you locals, of Michigan along over 40 miles of the coast of Lake Superior. It was established on October 15, 1966, and has over 73,000 acres, full of trails, waterfalls, sand dunes, caves, arches and pictured rocks similar to what was displayed on the quarter. The first Pictured Rocks quarters will be released on February 5th. 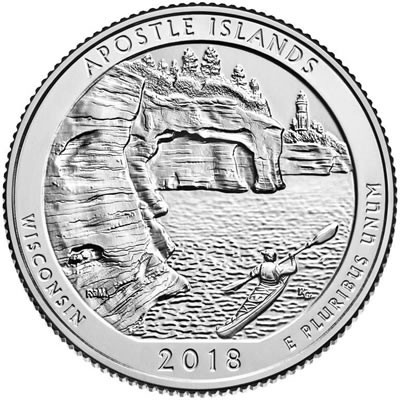 Established September 26, 1970, Apostle Islands National Lakeshore is made up of 22 islands off the coast of northern Wisconsin along Lake Superior. Well known for its sea caves as well as arches and lighthouses seen on the quarter. The coin also shows a kayaker. Some islands have a large concentration of black bears, herrings, gulls, cormorants, and swallows. The size of the islands range from 27 acres, Eagle Island, to 15,359 acres, Madeline Island. These coins will be released in April. 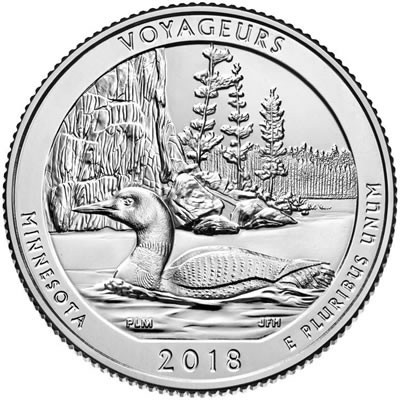 Just like Pictured Rocks and Apostle Islands, Voyageurs National Park is located on the northern part of the state, near International Falls and the Canadian border. The park was established on January 8, 1971, and encompasses over 218,000 acres, 81,000 acres being water. In fact, the primary way to enter the park is by water. The park consists of rocky shorelines, numerous lakes, and islands. The quarter shows a loon in the water near the shore. Besides the loon, the park is home of bears, moose, wolves and bald eagles. This coin will be released in June. 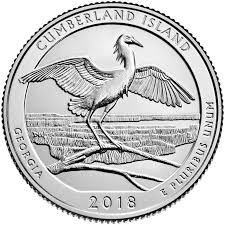 Cumberland Island is one of the largest barrier islands in the country. The National Seashore was established on October 23, 1972. Cumberland Island is located near St. Marys, Georgia, close to the Florida border. A ferry from the mainland will take you to the island, but don’t plan on bringing your car. There are no paved roads on the island. It is home to the Cumberland Island National Seashore Museum, the Ice House Museum and Plum Orchard. The quarter displays a snowy egret on a branch. It will be released in August. 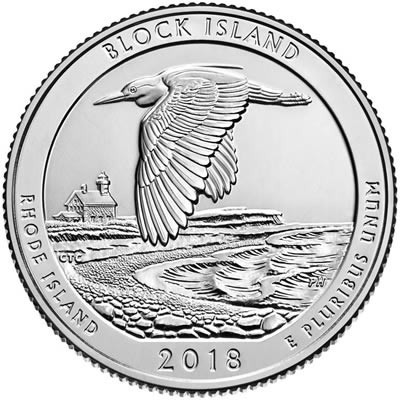 Last quarter to be released in 2018 will come from the smallest state in the union. Block Island is between 12 and 15 miles from the southern coast of mainland Rhode Island. The Wildlife Refuge was established on April 12, 1973, at the northern part of the island. The coin displays a night heron flying over Sandy Point where you can see the North Light Lighthouse in the distance. You can fly in a small plane or take a ferry to reach the island. You can take a car on the ferry, but with the island not being that big, most people rent scooters or bikes on the island. This quarter will be released to the public in November.

As these will be released individually from the Philadelphia and Denver mints during the year in circulation, these mints will also release Mint Sets. There will also be clad and silver proof sets from San Francisco. Do you plan on collecting these new quarters?

4 thoughts on “2018 America the Beautiful Quarters”