were silver dollars that were minted between 1921 and 1935. There were only 24 different Peace Dollars and they were minted in Philadelphia, Denver and San Francisco. During that time, I collected 23 of the 24 Peace Dollars, but in April 2001, I was laid off from work and had for the most part stopped collecting. Except for a few purchases, it wouldn’t be until 2014 that I decided to continue collecting coins.

I went through my folders to see which sets I needed to complete that I was working on in the past. The first one I went through were the silver Jefferson Nickels, also known as Wartime Nickels. I had 9 of the 11 nickels between 1942 and 1945. Between 2015 and 2016, I purchased the 2 remaining nickels I was missing and also bought the 1942-P Silver Proof Nickel to increase the set to 12. With that set complete, I decided to finish up the Peace Dollar set with the one remaining piece, the 1934-S. 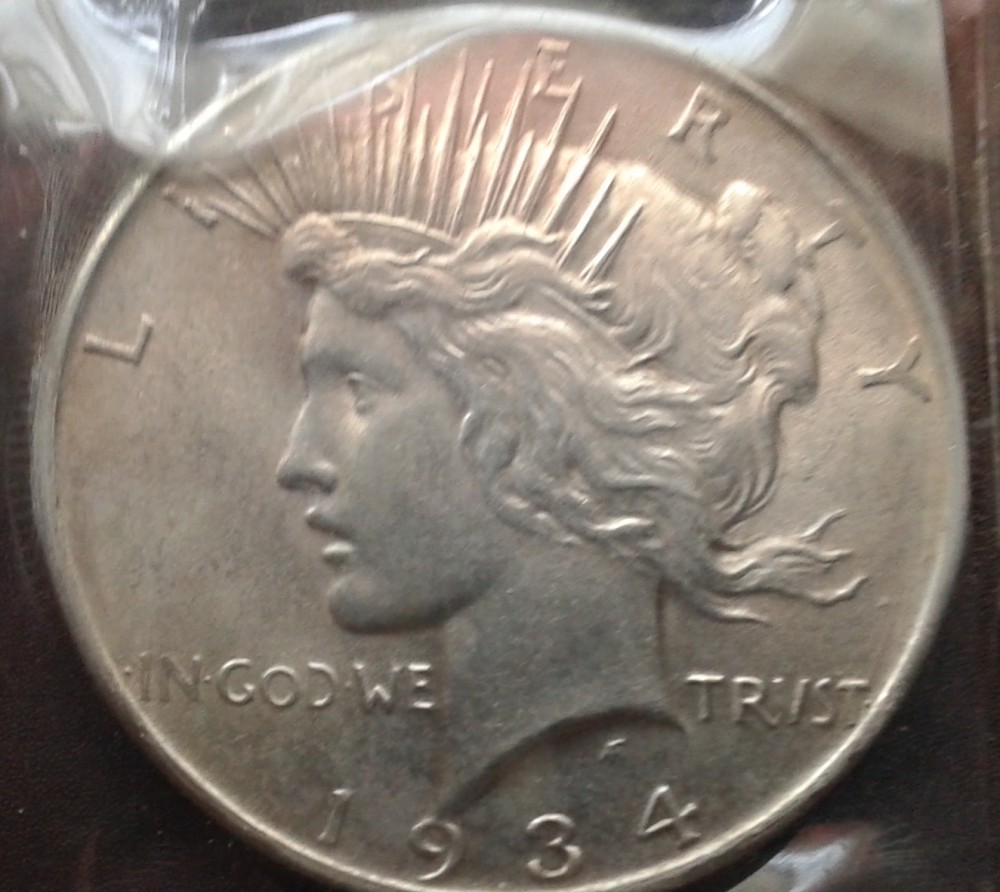 Four of these coins are valued significantly less than the 1934-S. Only the 1928 is valued close to the 1934-S in circulation, but not in uncirculated condition. An MS-60 1928 Peace Dollar

is currently worth $500, but the same condition 1934-S is worth between 4 to 5 times more than the 1928. How can this be when there were almost 3 times more 1934-S Peace Dollars minted than the 1928? Well, in 1928 the requirements of the Pittman Act were fulfilled. This act allowed more silver dollars to be produced as there were none minted between 1905 and 1920. Another act would be introduced to resume the production of silver dollars in 1934. Most of the 1934-S Dollars were released in circulation, making uncirculated ones scarce. Along with the 1921 and 1928 Peace Dollars, the 1934-S is considered a key date of the series.

There are not as many fake Peace Dollars as Morgan Dollars, but there still are a number of fake ones. Being a key date, the 1934-S has been counterfeited. The easiest way to see this is with the “S” mint mark. Supposedly, counterfeiters take 1934 Philadelphia Peace Dollars

and add the “S” to the reverse. This is why I wouldn’t buy this one online. I plan to buy it at a coin show or shop where I can see it up close.

This Is The Year!

I currently have enough saved for an Extremely Fine 1934-S Peace Dollar. Maybe I’ll try to go for an Almost Uncirculated coin which goes between $400 and $500. I’m definitely not going for an Uncirculated Dollar as they start at $2,000 and would have to be careful to not pick up a counterfeit one.

Maybe I’ll wait till my local coin show in April or the New Hampshire Coin Show in May, but I am going to get it this year. Wish me luck!

Is There a New US Dollar Coin in Our Future?
Key Dates
The Peace Dollar – The 20th Century Silver Dollar