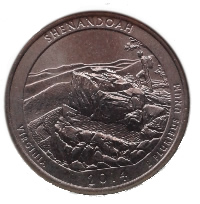 the US Virgin Islands and American Samoa. I got to enjoy the Shenandoah National Park in Virginia back in June. I drove down Sunrise Drive and the Blue Ridge Parkway up to the North Carolina border. You get a number of scenic views and historical sites along the way. It was a great, relaxing drive. Why am I talking about National Parks on a coin blog? Well, have you seen the Washington Quarters

were released. It was also in this year that Congress passed an act to produce a quarter from each state and US territory displaying a national park, refuge, forest, etc. With the US mint producing Washington Quarters for the District of Columbia and US Territories in 2009, the National Park Quarters

In 2010 and 2011, there were circulated and uncirculated coins minted in Philadelphia and Denver, and 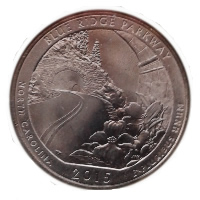 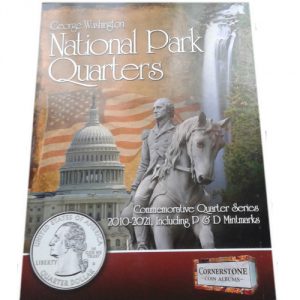 I saw this album at the New Hampshire Coin Show in Manchester, NH over a year ago. I figured I collected one of each state quarter for the United States map I purchased from the US Mint back in 1999. Why not go for the National Park Quarters

? This album goes from 2010 – 2021 and has holes for the Philadelphia and Denver coins. This must have been made before 2012 because there are no holes for San Francisco coins and I have found 2 in change. The Shenandoah and Blue Ridge Parkway quarters above are included in this album. As of this post, I am only missing 6 of the Philadelphia coins before 2016, but only have 4 coins from Denver. Now I have 2 reasons to visit Denver: visit the mint and buy quarter rolls.

Have You Visited any US National Parks?

Out of the 59 National Parks operated by the National Park Service, I have only made it to 2: Shenandoah in Virginia, and Arcadia in Maine. Most of the National Parks are west of the Mississippi River. California has 9. Alaska has 8. Utah has 5. That’s 22 right there. One I would especially like to visit would be Badlands in South Dakota so I could see Mount Rushmore nearby.

of before, the National Park Quarters

are bringing in new coin collectors. It’s a fun set to collect with all the different reverses. Would you collect them?